I made a couple of deposits via ATM yesterday. When I got home, I immediately logged onto my bank account to make sure they showed up.

They were both there, one to our personal account and one to my business account. And I was very glad, since I definitely didn't want a repeat of my bank error not in my favor escapade.

Mainly, of course, I just want my money in my accounts when I put it in there. But I also don't want the hassle factor of trying to clean up mistakes.

In this age of identity theft, banks are continually tightening security when it comes to online and phone account access. I have no problem with that. But it does make the simple job of checking your account a bit more tedious.

Via the Internet, I know go through two layers of verification that didn't exist when I set up online banking years ago.

And it's even more convoluted when I go the phone route.

Pumped up precautions: When I called a couple of weeks ago about my missing money, I had the usual Muzak-serenaded wait.

I didn't have as difficult a time as Tracy over at FRAUDfiles did with her recent call to Bank of America. But when my bank rep finally picked up, I did myself facing a barrage of questions.

I've been through the routine before. This security check, though, was much more stringent than in the past.

Oops, forgot to give her the Zip Code. Thankfully, she gave me a second chance. I listed the correct five digits and the questions resumed.

How many accounts do we have? What type?

Then came a near stumper. Name the branch, city and state, where the original account was opened.

I had to pause. Uh-oh. Did my delay indicate to the bank rep that I was a criminal trying to gain unauthorized account access?

The reason for my hesitancy was that our original account wasn't with our current megabank. It was with another, now defunct institution that the bigger bank bought.

So I gave her both.

She wanted the actual, now nonexistent first account locale. But she was impressed with the added info, as well as by the fact that I remembered the original account details. Truth be told, so was I, considering the commonplace things I have trouble recalling every day!

The bank rep noted that the question is the biggest stumbling block for many customers, who typically can come up with just the state. I suspect if too many inquiries are stopped because callers can't remember their original account details, that precaution will be tweaked.

At least my gender wasn't a problem: Despite the longer time it took to check my account via phone, you're not going to hear me complain about enhanced ID verification processes.

As an identity theft victim (blogged about here), I'd much rather answer questions that prove I'm me beforehand than do so afterward when I'm trying to convince a collection agency that I didn't open, much less default on, an account. 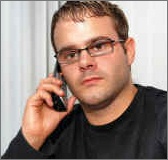 And I didn't have near the phone banking problem that Graham O'Brien did.

O'Brien was England, bank's telebanking service not once, but five times. The reason: Bank staff thought he was a woman because he has a high-pitched voice.

O'Brien admits he'll never sing the bass line in any chorus, but is furious that he had to show up in person to prove he is a man and owner of the account he was calling about.

"The ridiculous part about it is that any telebanking customer has to correctly answer questions about themselves as a security measure to avoid fraud," O'Brien told the Manchester Evening News. "I did this on every occasion, and they still wouldn't accept that I was Graham O'Brien."

O'Brien, who teaches business management and law at a college in Leeds, England, has received a formal apology from the bank. He is, however, still considering filing a sex discrimination lawsuit against the bank.

For its part, bank officials say, "Where there is any doubt about the authenticity of the caller, we must take every precaution."

Click here for an audio clip of O'Brien talking about his bank ordeal and judge for yourself whether bank over-reacted or acted properly. You also can read O'Brien's story here, and find additional audio links at the end of the article.

Why trust the telephone? After the first or second failed attempt, I would have simply written a letter (signed with my legal signature that matches my signature card on file) to conduct my business with the bank.

I think that's more than my bank. Particularly good since my dad is my co-account holder on one account...and I don't know his SSN. I should probably start memorizing new hubby's, eh?