Home Table of Contents Tax Tips Credits Deductions Refunds State Taxes Politics/Laws Tax Terms Archives
Are charitable tax deductions worth it?
How not to use PowerPoint

Bank error not in my favor

I have a friend who refuses to deposit checks via ATM. Laura's convinced that once the envelope disappears down that slot, she'll never see her money.

I, on the other hand, live by the ATM. I get cash there. I check balances there, although not so much now that we bank online. And, yes, I deposit checks there.

Guess what, Laura. One of my recent deposits didn't make it into my account.

Guess what else. It was a check that I handed to a teller inside the bank.

Yep, for some reason that I can't remember right now, I went into the bank to make the deposit. Maybe it was because I had checks to go into my business account and the personal checking account that the hubby and I share. Whatever. Point is I parked the car and walked into the bank.

It was a Monday, mid-morning, and just another couple there to make a transaction. So I got immediate service. 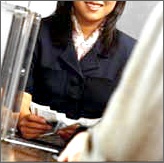 I handed over the business deposit and got back my receipt. Next, the young woman took my personal deposit and, voila, another receipt. I glanced at both to check the amounts. They were right, so I stuck them in my purse and headed out to finish my errands.

Then, a couple weeks later, the bank statement arrived. My personal account deposit was nowhere to be found.

Now when I make an ATM deposit, I usually go online to make sure the money is in or at least in the process of going into my account. See, Laura, your concerns did have some effect on me.

But since I had personally put this money in, hand-to-hand with another human, I didn't think about it. It's there, right? I watched the teller punch in the numbers, shuffle some papers, print out my deposit receipt and hand it to me.

I still had that receipt. What I didn't have was the money it showed I deposited.

First, I went online and checked my business account. Perhaps the teller inadvertently put my second deposit into that account, too. Nope. Not there. I was glad, however, to see that the business deposit I made that day was accounted for.

So I took another look at the personal account deposit receipt. A much closer look.

The amount, which I had previously confirmed as correct, was indeed right. But the last four digits of the account shown on that slip they are the only ones visible, per standard account protection practices in case you lose the slip were numbers that didn't match any account the hubby and I have.

I was stunned. It wasn't a simple transposition of a couple of numbers. It was like 1234 vs 9876. The incorrect digits on that deposit receipt, in fact, don't show up in that sequence anywhere in that or any other account we have with the bank.

So I called the bank. Of course I had to call instead of march into the branch office, which is what I really wanted to do, since I didn't look at my bank statement until a Friday evening.

Anyway, I called, talked to another young woman, explained my predicament and read her every number  transaction, (wrong) account, routing, teller ID, date on the slip. She promised me that on Monday, the money would be there.

She was right. Whew!

I also got lucky in that while it was a decent sized deposit, the hubby and I didn't need the money before it actually showed up. I've never bounced a check and I didn't want to start now, especially when I should have had the funds.

But I do admit that it was partly my fault. I didn't check our account online later that day to confirm that the money was indeed deposited.

And I didn't pay any attention to the account number shown on the deposit slip.

If I ever make another in-person deposit again, either inside the bank or at a drive through window, you can believe that's the first thing I'll check!

That's pretty bad that the teller got a deposit slip and still blew it. Each of my deposit slips has the account number MICR printed, and the teller would then just scan it electronically.

Yep. I always endorse checks "For deposit only" and write my account number on them. And I had a deposit slip. The teller just totally screwed up! And I've been wondering if the account holder who got my misdeposited money spent it all in one place!

When you endorsed the check for deposit, did you also write your account number on the back side of the check?