I live in bike-mad Austin. You can thank or blame local resident Lance Armstrong for the fixation. So the 1999 ABC News report (video below) that taxalicious found on a Toronto bicycle messenger's tax victory caught my eye.

The biker's tax argument: His food was fuel for his bike and as such, he should be able to deduct the cost of said fuel.

TaxProf did a little more digging (many thanks!) and found, among other related items, two follow-up videos (here and here) on Wayne Scott's 18-year battle with Revenue Canada, the Great White North's equivalent to the IRS, to secure a national "Food as Fuel" tax break.

The upshot: All Canadian nonmotorized couriers now get a deduction to pay for an one extra meal a day, no receipts needed. One report says it's (Canadian $); another refers to a deduction, so maybe it's been hiked over the years or indexed for inflation.

No bike break in the US of A: Unfortunately for American bicycle messengers, there's no corresponding IRS tax break. The IRS Chief Counsel, in response to a 1998 inquiry, explained the agency's reasoning:

Expenditures for food, the "fuel" for all human activities, whether or not business related, are considered inherently personal in nature. Therefore, the cost of food generally is not deductible as a trade or business expense unless it is paid or incurred while traveling away from home overnight or, under some circumstances, in connection with business entertainment.

The full text of the IRS letter is reproduced on TaxProf. It was originally posted at Bikes at Work, Inc., which all those years ago brought the matter to the attention of its congressman. 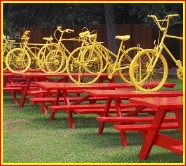 Inequitable transportation breaks? Now, nine years later, and there's still no U.S. tax break for folks who use their bikes to get around or do their work. But it's certainly something to think about in this time of growing attention to greenhouse gases, alternative energy and carbon footprints or, in this case, bike pedals.

The U.S. tax code already offers tax credits for other alternative fuel vehicles, such as hybrids. You don't have to use your hybrid for business to get the credit.

There also are federal tax breaks for commuting by car (blogged here). Why not for commuting by bike? The Bicycle Commuters Benefits Act of 2007 (S. 858), would extend the transportation fringe benefit to bicycle commuters. It was introduced by Sen. Ron Wyden, D-Oregon, back in March, but is stalled in the Senate Finance Committee.

Interested bicyclists, especially those who depend upon their wheels for work, might want to give their elected officials a call.

Blog Action Day: I thought about holding onto this story until Oct. 15. That's Blog Action Day. The idea is to bring the blogging community together for just one day to talk about one issue.

That issue on Oct. 15 will be the environment.

But I didn't want to wait that long to share this two-wheeled tax tidbit with you. And as long-time readers know, I've blogged about nature and environmental issues before, so I shouldn't have any problem coming up with another post on the topic in a couple of months.

I was happy to find several personal finance bloggers already have signed up to participate: Financial Dominance, Get Rich Slowly, Journey to Financial Freedom, Money, Matter, and More Musings, Money and Such, Money and Values and One Frugal Girl.

And even with my fractured Spanish, I could tell that Miz finanzas personales by Claudio from Argentina is about personal finances.

I apologize if I missed any of my money-related blogging colleagues. And I'm sure many more will join the effort in the coming weeks.

You can find out more about Blog Action Day
One issue. One Day. Thousands of Voices.  and register your own blog in the effort here.

The photo of bicycles on tables is by the hubby.
It was a display outside the Austin restaurant Hudson's on the Bend
honoring Lance's 7th Tour de France championship in 2005.

Good point, Mapgirl. I would think the bike would qualify as business equipment and either be depreciable or deducted all at once as part of Sec. 179 expenses.

As a bike messenger though, can he fully deduct the cost of his bicycle? Or at least a good portion of it? Titanium parts and carbon frames ain't cheap! I had some bike messenger friends in SF and they really do earn their money with those hills!