Well, it happened. hoped that if I and millions of other baseball fans wished hard enough, Barry Bonds would not hit #756. But once again, my telekinetic or psychic or whatever mental abilities it takes to control physical events failed me.

Now we watch the subsequent tax game play out as the IRS and tax attorneys try to determine the tax treatment of the record-breaking ball that sailed into the right-centerfield seats last Tuesday night at San Francisco's AT&T Park.

Even before Matt Murphy crawled out from under the scrum with the historic orb in hand, the Wall Street Journal Law Blog had defined the tax debate that would soon follow:

I was talking with another tax expert, Fred Stein, RIA Senior Analyst from Thomson Tax and he confirmed that the IRS right to try to collect from Murphy immediately, based on the estimated value of the ball at the time it was caught.

Most estimates have put the ball's value at half a million bucks. That means Murphy would then be in the highest tax bracket, And the tax on the ball alone would be $175,000 (noting that this is straight percentage points math; no deductions, exemptions, other income, etc., taken into account).

Stein noted that this same issue came up on Mark McGwire's shot that broke Roger Maris' single season home run record. Back then, the IRS made noise about collecting from that fan just after the catch, but relented because of the bad PR such a plan produced.

Will public perception come into play again? Or, faced with pressure to close the Tax Gap, will the IRS demand its due?

Only the IRS knows: Or does it? The agency's chief counsel Don Korb, when asked by the WSJ to clarify the tax questions surrounding Bond's blast, replied, "Please, whatever you do, don't ask me that question."

Is Korb, who recently came up with a list of the MLB's top 10 tax events (McGwire's 62nd home run ball ranked first), simply being coy? Or is there still a debate going on at the IRS itself?

Time for real Congressional leadership: Count me among the taxpayers and baseball fans who think common sense should prevail; i.e., taxes should be collected only after the ball is sold. 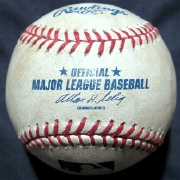 Congress, which loves to stick its collective noses into sports matters, notably steroids abuse and MLB's antitrust exemption, needs to focus instead on the tax implications of record-breaking memorabilia obtained by sports fans.

In addition to the accession to wealth issue (which involves regular income tax rates), there's the matter of capital gains on future of the ball (long-term, short-term or collectibles rate), not to mention the gift tax considerations if the fan gives the ball to the record-making player and/or Hall of Fame.

Surely Capitol Hill, which is full of ostensible baseball fans who now have their own Washington Nationals to root, root, root for, can come up with a new law to deal with the special tax consideration such souvenirs deserve.

And it would be great to have it on the books, signed by the chief executive who himself was once a Rangers' co-owner, before the first pitch of this year's World Series.

Extra blog innings: You can read more on the #756 tax matter from some of my fellow tax bloggers: TaxProf, taxgirl and taxalicious.

actually, the ball is not a gift from the Giants because in 1921 the MLB agreed that if you purchased a ticket to a game and you caught a ball, you were allowed to keep it. it is specifically not a gift from anyone, but not exactly a prize either.

An exception to the "any accession to wealth is taxable income" rule is a gift received (the giver pays gift tax).

According to the IRS, a gift tax applies to the transfer by gift of any property. You make a gift if you give property (including money), or the use of or income from property, without expecting to receive something of at least equal value in return. The general rule is that any gift is a taxable gift.

So the question is whether a ball caught at a stadium is a gift. Who was the owner of the ball before the fan caught it? It was the home team, who provides the game balls. Did they willingly allow the fan to keep the ball, without expecting to receive something of at least equal value in return? Yes. Therefore, it is a gift from the Giants to the fan. And I would further argue that the ball was worth, for example, $1 million before the fan caught it. If the fan sells it for $1 million, there is no capital gain, therefore the fan pays no taxes. And the Giants better not forget to pay the gift tax.