Since it's Sunday, it seems fitting to bring you a few thoughts on taxes from Pope Benedict XVI. 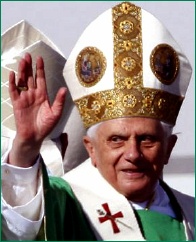 According to the Times of London, the Pope is preparing to condemn tax evasion as "socially unjust." The paper reports that the pontiff's second encyclical will denounce the use of tax havens and offshore bank accounts by wealthy individuals.

Such tax-avoidance techniques, from the Pope's perspective, reduce tax revenues that benefit society as a whole.

TaxProf Paul Caron says you can find additional info on the upcoming papal tax paper at Catholic World News and Catholic Online. Caron also points us to the Catholic legal theory blog Mirror of Justice, where Rick Garnet offers the Pope some additional points to ponder:

I hope this document attends carefully to the non-trivial challenge of defining "tax evasion." I hope it does not suggest that there is a general moral obligation to avoid actions that "reduce[] tax revenues for the benefit of society as a whole." (The issue, it seems to me, in "tax evasion" should be law-breaking.)

And, I hope it at least acknowledges the possibility that some tax policies that are motivated by a desire or packaged as efforts to raise "revenues for the benefit of society as a whole" can in fact reduce both social welfare and the well being of the poor. (The piece above notes that "tax evasion" is making it difficult to "plug Italy's huge budget deficit." I hope, then, that the document will at least suggest the possibility that waste and overspending by the state raises moral questions, too.)

The papal tax comments no doubt were prompted in part by the Italian government's recent crackdown on that country's unpaid taxes, particularly those owed by wealthy citizens. But I suspect that this is one time that the IRS, which for years has been targeting U.S. taxpayers who utilize questionable offshore tax accounts, also appreciates a little commingling of church and state.

Presidential politics and tax policy: I also would be interested to hear the Vatican's take on GOP tax policies here in the U.S. that have, over the last six years, reduced government funding for many social programs while affording wealthier individuals additional tax breaks. This is, of course, the party that won Church approval for its official stance on a woman's right to choose.

Unfortunately, political positions don't operate in vacuums. And government policy put into place primarily because of a single issue, be it fiscally or morally motivated, often produces adverse multi-issue consequences.

In case you haven't caught all the 2008 presidential debates, the advocacy group Citizens for Tax Justice offers its take on the candidates' tax positions. The stances of both Democrat and Republican Oval Office seekers are classified according to what CTJ deems bad and better ideas.

In the "bad" category are make permanent the Bush tax cuts, repeal the estate tax, institute a national sales tax, institute a flat tax, increase revenue by cutting taxes, offer tax breaks for health care and eliminate the IRS. Yes, that last one is a bad idea, from an administrative standpoint if nothing else.

"Better" tax options, according to CTJ, are repealing the Bush tax cuts to fund other priorities, stop taxing work more than wealth, closing the loophole for carried interest and taxing carbon emissions.

The Pope, and CTJ, would demand that citizens simply "feed the beast" when time has shown that "the beast," (government) does not know how to be held accountible for profligate spending and currency devaluation because of backing by nothing other than the "full faith and confidence" of the country's populace.

Here in the states, one need only look back in history to see how the Federal Reserve caused the Great Depression of 1929, and has more recently inflated the currency to cover for the sub-prime fiasco that brought many lenders LOTSA DOLLARS IN FEES.

The "beast" takes care of itself (and their internationalist banker supporters who just love tax withholding from citizens paychecks every two weeks).

Perhaps the Pope ought to review a movement in the United States to replace the income tax system with the FairTax - a system where the government "get theirs" the same way as America's working families do . . . when/because something is sold.

As far as CTJ's 2004 ITEP study, FairTax.org tells that story at the following link: