In the wake of the Minnesota bridge disaster, officials across the country scrambled to inspect their bridges and roadways.

And most lawmakers, at both the state and federal levels, are scrambling to come up with some money to pay for the many projects found to be, if not downright dangerous, at least in need of some long-overdue touch-up.

Check out the American Society of Civil Engineers National Report Card, keeping in mind that this indicates the status two years ago. Grades now, after almost two more years of wear and tear, would likely be much lower.

Dubya, however, has objected to more federal money for such maintenance. 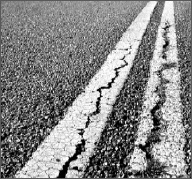 At a  press conference last week, the prez flat out objected to raising the federal gasoline tax, currently a gallon, to help pay for the country's aging transportation infrastructure. Although recent reports cite approximately 500 bridges as "structurally deficient," Dubya says Congress needs to find the repair money by changing its spending priorities.

OK, I do agree that simply throwing money at a problem is not necessarily the best route. And it's no secret that Congress has long been known for idiotic earmarking of projects, or earmarking of idiotic projects. The adjective works both ways.

In the transportation area, you need look no further than the efforts by Sen. Ted Stevens, one of the president's GOP colleagues, to get $453 million for two Alaska bridges. Part of that federal money was for the infamous "bridge to nowhere." Yes, I do agree with Dubya, that priorities do need to be reviewed.

But then the president went and added insult to injury. At the same event where he said he wouldn't support a gas tax increase to fund the highway trust fund, Dubya talked about cutting corporate tax rates. He did at least say any such tax cuts should be revenue neutral, to pay for them would have to come from somewhere else, ideally by cutting spending, like, say, for transportation.

Irrespective of the arguments for and against both tax issues, the essentially simultaneous discussion of them struck me as tasteless at best and heartless at worst.

To hear the nation's leader say "no" to funds that could help prevent future tragedies then turn around and advocate cutting business taxes, especially while Minnesotans are still digging out of the horrific debris, while people are still being buried and mourned, just made me cringe.

State gas taxes going up? The federal fuel tax has been at its current level since 1993. Some state lawmakers, however, are considering raising their taxes to pay for infrastructure costs.

Minnesota's Republican governor, Tim Pawlenty, has twice vetoed a state fuel tax increase. But since the W35 bridge disaster, he has indicated that he's now open to one.

If Minnesota does increase its fuel tax rate, it will join the national movement in that direction. A McClatchy Newspapers article reports that since the last federal tax tax increase, have hiked their fuel taxes, but only three have raised them enough to keep pace with inflation.

Tax publisher and software provider CCH conducts an annual survey of state consumption taxes and this year found that while some states have tripled their cigarette taxes, most held firm on gasoline and sales tax rates. We must point out that the survey looked at these common state levies as of July 1, exactly a month before the Minneapolis catastrophe, and they reflect the previous legislative session's actions.

CCH's national map of tax rates shows just how varied the rates are in each category across the United States.

"Cigarettes continue to be targeted for some hefty tax increases," said CCH State Tax Analyst Dan Schibley, JD. "By contrast, the vast majority of states are standing pat on gas and sales taxes."

A wide range of state gas taxes: CCH found that state per-gallon gasoline taxes range from a low of in Georgia to a high of in Washington, which raised its gas tax from last year.

In more than half the states, the rate is per gallon or less. But many drivers actually pay more than that basic rate when they pull up to the pump.

Taxes and fees related to environmental impact, licenses and inspections may also be passed through at the pump to consumers in a number of states. New York drivers, for example, contribute considerably more to the state treasury than their state's gas tax for every gallon of gas they buy.

In addition, some states collect regular sales tax on top of the gasoline tax, and, in Hawaii, local taxes in each of its counties can more than double the basic 16-cent-per-gallon state rate.

Seven states have higher gas taxes now than a year ago, with Washington's hike the largest increase, while two states (Iowa and Nebraska) lowered their rates by fractions of a penny. In many states, at least part of the gas tax rate is linked to the wholesale cost of fuel or the cost of highway construction.

While some motorists might consider crossing a state line to buy cheaper gas, the price of gas itself actually makes staying put a better option.

"With gas averaging close to nationwide, your car would have to get phenomenal mileage to justify driving any distance just to save a few cents per gallon on the gas tax," said Schibley.