One of the biggest drawbacks of owning a home is paying the property taxes. Sure you get to deduct them on your federal 1040 (if you itemize). But you have to come up with them in the first place.

States and counties, which are the usual tax assessing and collecting jurisdictions, are continually grappling with this issue. Here in Texas, we're still working through changes to our system that took years to be enacted.

And as home values appreciated over the last few years, property taxes have become an even hotter tax topic.

One Muncie, Ind., man is so mad about how much he had to pay in property taxes he decided to make a statement. He carted bags of coins and $1 bills to the tax office to pay his $12,656.07 bill.

The Indianapolis Star reports that Cary Malchow's payment method stalled the line as all three of the tax office's cashiers had to hand count the payment, which was for taxes assessed on his home, some rental properties and his business.

It took county workers 75 minutes to verify the payment, and that in turn meant the tax office missed its daily deposit at a local bank. The delay cost the county an estimated $1,136 in interest that it would have accrued overnight if the deposit had been made as usual.

'SOH' what? In Florida, like all the other 49 states and D.C., property taxes also are a major hot-button issue, fiscally and politically.

But for the Sunshine State, property assessments are of particular importance since the state doesn't have an income tax. That leaves property tax collections are the major source of government income. 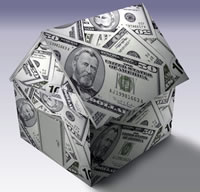 Now, as the state's real estate market has gone from very hot to very cold (as blogged about here), the collection process has become more contentious and some property tax battles are ending up in courtrooms.

Recently, some Alabama residents who own second homes in the Florida Panhandle filed suit claiming the state's property tax system violated equal protection laws. They argued that Florida's Save our Homes (SOH) cap on property tax increases for residents unconstitutionally punishes out-of-state but property tax paying homeowners. Some studies show nonresident property owners pay twice as much in this regard than do their year-round neighbors.

The state court judge in that case disagreed, saying the constitutionally of the SOH tax cap had been settled in previous cases.

The ruling, however, doesn't affect a separate, pending lawsuit filed by Eric Hersh challenging recently-passed property tax changes made by the state legislature.

After toying with ideas as extreme as eliminating property taxes altogether (discussed in this earlier post), state lawmakers finally decided on a two-pronged approach.

First, they capped future tax revenue for local governments and ordered them to cut their budgets to produce homeowner property tax savings. Then, next January, Florida voters will go to the polls to decide on creating an option for homeowners to keep their $25,000 homestead exemption and SOH cap or switch to a new "super exemption'' worth 75 percent of the first $200,000 of assessed value and 15 percent of the next $300,000.

Hersh, mayor of the South Florida city of Weston, says the legislative changes violate local governments' constitutional rights to set taxes. He's also concerned that the Jan. 29 ballot language is misleading; it doesn't make it clear that the SOH option would eventually be phased out if the measure passes since new homebuyers would automatically get the new exemption.

And some legal eagles say that if the measure does pass in January, it could set the stage for additional equal protection lawsuits since it would create two different classes of Florida residents, those taxed under the SOH cap and new homebuyers who wouldn't have the option.

Additional housing costs: In addition to the property tax considerations, check out Get Rich Slowly's post on the other realities of homeownership.

And Forbes just published a look at the best housing markets (Seattle is at top; Austin and San Antonio also make the top 10) and worst (led by Detroit).

Driving home the fine: The tax payment in Indiana reminded me of one of my all-time favorite stands against the man.

Auto racer Rusty Wallace, sometimes incorrigible and always voluble, once was fined $5,000 for using a profanity in an on-air interview. The ill-chosen remark came after the 1997 Martinsville's race in which Wallace was penalized for jumping a restart as he was leading with only a few laps remaining.

Concerned about its image, even before the FCC issued large fines for such potentially offending broadcasts, NASCAR slapped Rusty with the fine. But the drive of the #2 car wasn't going to let it go at that.

Oh, he paid the fine. In fact, he did so the very next week before the race in Charlotte. But he paid with typical Rusty flair. A Brinks truck took to the track before delivering its contents to NASCAR officials: The full $5,000 fine as 500,000 pennies.

NASCAR had no choice but to accept the money, since it was legal tender for all debts, public and private, and the racing group didn't have a policy as to how payment for fines would be made.

And, like the Muncie tax protester, Rusty made sure that the media was on hand.