The IRS has made it official. The details on claiming the tax break for the cost of caring for a child or other dependent so you can work have been formalized.

CCH, the tax information publishing company (among other things), reports that the agency has adopted the final regulations, most of which reflect proposed regulations that were published on and have been in use by filers since then.

Here are the highlights:

Summer school vs. day camp: The final regulations clarify that the costs of summer school and tutoring programs are not allowable expenses in claiming the credit. The reason: They are educational in nature.

But as previously proposed, and already claimed by many parents, the final regulations retain the rule that all costs of a day camp or similar program generally meet the credit's qualifying employment-related expense standard, even when the camp specializes in a particular activity, such as soccer or computers.

Similarly, the full amount paid for an education day camp that focuses on reading, math, writing and study skills may be a qualifying expense.

No portion of the cost of an overnight camp, however, can be claimed as as part of the child or dependent care credit.

Jimmy has the sniffles: It was suggested that the cost of sending a child to a sick care center should be treated as a qualifying expense. The IRS decided against that.

When a parent decides to send his or her ailing child to a special care center so the parent can work, it might be child-care related for purposes of the credit or it might be a deductible medical expense, says the IRS. In either case, the agency maintains that it is a factual matter that must be determined on a case-by-case basis.

Mom on the night shift: The final regulations clarify that costs of overnight care and day care for parents who work at night and sleep during the day may be qualifying expenses. 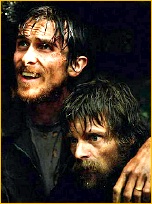 Not a film for the kids: The reason I'm late getting this up today is that the hubby and I took the afternoon off and went to and lunch.

Since we have no kids, we didn't have about finding someone to look after them, which we would have had to do because the movie we saw definitely wasn't a kiddie flick.

We went to see Rescue Dawn, sort of the Papillon of this day and age. It's about a Navy pilot's harrowing time as a POW in Laos -- he was downed on his first mission, which took place soon after the U.S. got involved in the Viet Nam war -- and his equally horrific escape.

Christian Bale is one of the best actors out there, not to mention darned good looking. And if you're only familiar with Steve Zahn from his comedic roles, his performance here proves he has a whole lot to offer on the dramatic side.

Of course, even if we had needed to hire a babysitter for the afternoon, it wouldn't have counted toward the credit, since we were skipping out on, not going to, work!

I've being researching about Child care and reading your blog, I found your post very helpful :) . I thought I would leave my first comment. I don't know what to say except that I have enjoyed reading. Nice blog!