Remember those huge speeding tickets that the state of Virginia started issuing to its drivers on July 1? If not, you can read about them in this previous blog post.

Well, as expected, the plan hasn't gone over too well and lawmakers in Virginia are hearing -- a lot -- about it.

The New York Times reports today that down in Richmond, the first of our two car-connected cities, Virginia lawmakers have been inundated by calls and e-mails from angry constituents.

An upset electorate is not unusual. But with all 140 members of the Old Dominion's legislature up for re-election this fall, many are taking seriously the public's threats to vote them out of office if they do not get the governor to call a special session to reconsider the law.

One of arguments raised by opponents of the new and substantially higher speeding fines is that the levy disproportionately affects Virginia's lower-income drivers "because they will be least able to handle such a huge fine. … Someone living paycheck to paycheck is going to be wiped out by a small mistake."

I certainly understand how a speeding fine of several thousand dollars will really hurt someone who might not make that much in a week or even a month. But invoking those folks is pure and simple grandstanding. The people who will be hurt the most are those who ignore the speed limits, regardless of their income.

An earlier car-tax contretemps: Demagoguery aside, the men and women working in Richmond's statehouse are probably right to pay attention to voters upset about government levies connected to their vehicles.

Back in 1997, Republican Attorney General Jim Gilmore got to move into the Virginia governor's mansion primarily because of his "No Car Tax" pledge. Gilmore was tapping into the electorate's loathing of the state's personal property tax on automobiles.

Repeal of that tax came in 1998, with precautions phased in over five years that the annual reductions would be postponed if revenue targets were not met. A slowing economy subsequently posed fiscal problems connected to the car-tax repeal.

But the very real political results of the car-connected tax that produced Gilmore's win surely must be on Virginia lawmakers' minds now as they listen to the complaints about the new speeding fines.

Now to New York: Political realities also are key to the tale, a little further up the Eastern Seaboard, of our other car fee city, Manhattan. 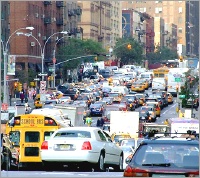 The New York State Senate decided this week not to consider Mayor Michael Bloomberg’s plan to charge a fee to drivers who enter or leave the busiest parts of Manhattan. That inaction meant New York City missed the deadline to apply for the federal funds that it would have needed to implement the congestion zone program, discussed in previous blog posts here and here.

While Empire State lawmakers had some real questions about the proposal's specifics, it looks like political miscalculations were just as important in dooming the effort to reduce driving in parts of the Big Apple.

In an article about the demise of the plan, again from the Times, we're told, "While much of the discussion was about details of the plan, it was also apparent that larger political agendas were affecting the negotiations."

At issue apparently were decisions by Bloomberg, who recently left the Republican Party, to continue supporting GOP candidates even after telling Democrats that he was "not political."

"The mayor tried to explain that he wasn't political," Senator Liz Krueger, a Manhattan Democrat, told the paper. "But most of us in politics don't believe that any mayor is not political."

Which just goes to show that regardless of where you live in the U.S., when it comes to fees or fines or taxes or whatever you want to call governmental collection, at any level, of citizen money, politics definitely come into play.