Summer is vacation time for most folks, But it's also the time of year when kids, fresh out of the classroom, get jobs. 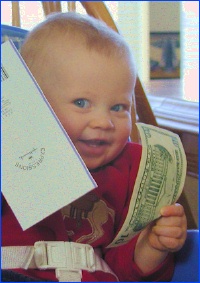 Whether it's washing cars or mowing lawns or supersizing drive-thru, these youngsters will, for the next three months, have more money than they've had all year. That makes this the perfect time for parents to have a talk with their kids about money.

For some families, though, that discussion is as uncomfortable as the one about the birds and bees. In fact, says Lori Mackey, creator of financial products for kids and the Prosperity4Kids Website, "Research shows we talk more about sex and drugs than we do money in our homes. Have conversations about money often, so your children will be comfortable with asking questions about money."

That hesitancy to discuss money with kids is one of eight common mistakes Mackey says parents regularly make when it comes to kids and cash. The entire list goes:

Kids' income and the new minimum wage: Just before Memorial Day, the unofficial kickoff of summer, the new minimum wage bill became law. The rate, which has been stuck at $5.15 an hour for the last decade, will go to $5.85 per hour on July 24. So some kids could be making a bit more money at their summer jobs this year.

While the new law will increase the earning potential of some kids, it also will take a bigger tax bite out of the unearned income of young investors. Under the law, the Kiddie Tax has been expanded yet again to include more investment income in higher tax brackets, a possibility l blogged about back in February when the minimum wage debate began.

The Kiddie Tax was created to keep parents from sheltering investments by putting assets in their childrens' names, since the kids typically are in lower tax brackets. For years, the law required that such child-held accounts that earned over a certain amount (currently in excess of $1,700) be taxed at the parents' highest marginal tax rate until the child turned 14. After that birthday, the income was taxed at the kid's rate.

Note the phrase "marginal tax rate:" That means regular tax brackets, as high as 35 percent, apply, not the preferable capital gains rates (5 or 15 percent depending on your tax bracket) even though we're talking about cashing in capital assets.

Last year, the Kiddie Tax cutoff age was increased to 18.

Now, the parent's higher tax rates apply until the young investor turns 19 or, if the child is a full-time student, turns 24.

More time, but more taxes: Last year the law was changed mid-year but made applicable to earnings in all of 2006. This time at least, there's no retroactivity issue.

But the change means that next year, college kids won't be able to sell investment accounts to pay school costs. That sound you hear is the rush of folks shifting money into the more tax-advantageous 529 plans.

The new law also closes a loophole in these Kiddie Tax cases that would have allowed taxpayers who in 2008 are in the 15 percent and 10 percent brackets, which presumably includes a good number of young filers, to pay no capital gains taxes on assets sold next year. Other, older investors in the lower brackets who sell investments next year will still get the no-tax benefit on their capital gains.

The one bit of good news is that since the Kiddie Tax change doesn't take effect for almost seven more months, young investors who turn 18 this year can sell their holdings by Dec. 31 and pay any taxes at their own, lower rates.

Photo courtesy of IdahoEditor and morgueFile.com

Great post. It's so important to talk to your kids about money but most people just clam up. I'm hoping to get involved with a local non-profit which teaches classes to kids because I think it's a great program and will do much good. Thanks for blogging about this important issue and encouraging people to take the bull by the horns and teach those kids! This is a Post of the Day: http://personalfinance101org.blogspot.com/2007/06/personal-finance-101-posts-of-day-6507.html

We are very interested in hearing more about your efforts to bring financial literacy to children, and help them be aware and secure their futures.

We are OINK! the Business Newspaper for Kids, primarily aimed at 7 to 12 year olds. OINK! is pink, like the Financial Times, full of money matters for kids and is distributed FREE each month upon request to schools, libraries, children’s hospitals and sports clubs across the United Kingdom.

Over the past four years we have built a steady reputation of bringing information about money and commerce to kids in a fun, creative and highly stylised way. The newspaper’s content is cutting edge, ground breaking and often thought provoking, and has won recognition from the National Literacy Trust and the Schools Library Association as an important literacy and learning tool.

Amongst our many supporters, we are pleased to include the Bank of England, the London Stock Exchange, the Financial Times, Capital Disney, SEGA, Hamleys, SONY, Bandai.

We produce a weekly radio show, OINK! ON AIR, which is broadcast each Sunday on Capital Disney Radio – the UK’s favourite children’s digital radio station.

We have recently introduced the Piggybank® Fantasy Stock Exchange™ which provides kids with a fantastic opportunity to learn all about stocks and shares and play the stock market absolutely free.

Below please find a link to our websites.
www.piggybank.co.uk www.fantasystockexchange.biz