No, not the ubiquitous Capt. Jack Sparrow and his crew, although Slate's review of the third Pirates of the Caribbean flick does make a cinematic point using a tax audit analogy.

Parks Associates, in its latest look at international technology trends, found that on the moral outrage meter, pirated music and video content ranks right up there with tax cheating.

Click the table below for a larger version and a better look at some other questionable activities and what U.S. respondents think of them. 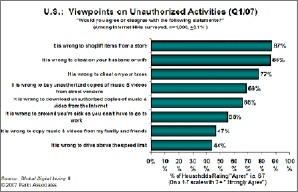 Downloading attitudes, however, differ sharply by age, according the survey conducted earlier this year. Just over half of respondents aged 18 to 25 believe downloading unauthorized content is wrong, while 75 percent of those 45 or older frown upon the practice.

"Downloading will be a phase for some, but these young consumers still represent a threat to the music and movie industries," said John Barrett, director of research at Parks Associates. "Young adults are the key consumers for music and movies. Even a temporary lull in their purchasing can have a big impact."

Yo ho, yo ho, an auditor's life for me: In case you don't want to peruse the full review of mentioned earlier, here's the relevant section:

But dying in the Pirates of the Caribbean world is sort of like being audited by the IRS: Sure, it's a drag, but as long as you talk to the right people and pony up the loot, it'll be over with soon enough. The tax lawyer for the Black Pearl crew is Tia Dalma (Naomie Harris), a voodoo priestess who, it turns out, happens to be the sea goddess Calypso in human form, hence her power to revive the dead.

Thanks to TaxProf for the tax and movie tip.

The Slate reviewer isn't too enamored of the third installment, but it's a good thing for Disney/Buena Vista that moviegoers, and Johnny Depp fans, usually don't care what critics have to say. When it comes to this film franchise, I'm one of them. Once the opening weekend crowds thin out, I'll drag the hubby to see Johnny/Jack and crew.

The movie didn't need our early support anyway. According to Box Office Mojo, the film's estimated $126.5 million take over the three-day weekend (plus Thursday night previews) will give it the fifth-highest grossing opening weekend of all time, and its box-office booty means it will officially shatter the Memorial Day weekend record on Monday.