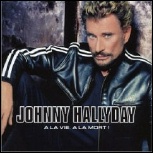 Well, that's what legendary French rocker Johnny Hallyday will say to his homeland fans on That's when newly-elected French president Nicolas Sarkozy will be sworn in. When that happens, Hallyday believes it will be financially safe for him to return home.

Hallyday moved to Switzerland last year because he was tired of paying what he considered exorbitant French taxes. Now he's convinced that Sarkozy will follow through on his campaign promise to cut taxes.

Hallyday's wife Laetitia told the media, "Nicolas Sarkozy's policies will certainly lead us to come back to France." In another interview with French radio, the missus elaborated on the tax reasons for the couple's return: "Nicolas wants to limit the taxes to 50 percent. That means working half the year for the state, and not three-quarters of the year. We love France and we love our life in France."

Mrs. H's use of the Sarkozy's first name apparently was not just for show. Her husband and the politician are such good friends that Hallyday has already crossed the border, at least temporarily, to celebrate with Sarkozy at a post-election dinner in Paris.

Whatever else you might think of the French, you gotta love their flair for the dramatic ... as well as a lot of their food (I'm thinking pastries here, not escargot) and that champagne I'm sure Hallyday and Sarkozy used to toast the election victory!

I would say "Je suis retournée," and I am sure that I am correct.
If I were him I wouldn't go back though. Oui, les pâtisseries sont délicieuses, mais quand on paie soixante-quinze pourcent de leur argent au gouvernement, c'est simplement trop.