AMT across the USA

As candidates continue along what they hope will be the road to the White House, taxes and tax breaks keep coming up. That's not unusual in any election. And it's especially relevant for the next occupant of the Oval Office, since that person will have to deal with the 2010 expiration date of W's many tax cuts.

One common campaign theme is how to preserve middle- and lower-income tax breaks. A popular answer so far is to raise taxes on the wealthiest Americans to pay for continuation or expansion of tax breaks for those in the other tax brackets.

Last week, the Senate Finance Committee heard testimony on middle-class economic issues. Witnesses testified that income inequality is rising. Between 2004 and 2005, the average inflation-adjusted income of the top one percent of households increased by more than $100,000; the average income of the bottom 90 percent of households increased by only $250. Committee Chairman Max Baucus, D-Mont., said the Committee will hold more hearings to explore ways to continue and expand middle-class tax relief.

On Sunday, Sen. Barack Obama (D-Ill.) told ABC's This Week news program that he supports “rolling back the Bush tax cuts on the top of people who don’t need it” to pay for health care reforms.

Former Democratic Senator John Edwards also has called for a roll back of Bush's tax cuts on Americans earning more than $200,000 a year to pay for his universal health care proposal. He also supports a windfall profits tax on oil companies, with that money earmarked for programs to reduce U.S. dependence on oil.

Adjusting the AMT: A tax created almost ago to ensure that the wealthiest taxpayers remitted their fair share to the IRS also continues to attract the attention of lawmakers.

As promised when they took control of Capitol Hill in January, House Democratic leaders are preparing legislation that would permanently protect all but the most wealthy from the alternative minimum tax. But just how changes to or total repeal of the AMT would help -- or hurt -- is still being debated.

On Monday, Charles Grassley (R-Iowa), the ranking Republican on the Senate Finance Committee, told his colleagues that without the AMT, the top tax brackets most likely would increase dramatically (the phrase "46 percent marginal tax rate" was tossed out there ) to make up for no more AMT money.

Meanwhile, the Tax Foundation today issued a special report on the AMT. The group looks at what it sees as the key questions Congress must consider: Where does the AMT improve the system? What harm does it do? Who has to file an AMT return and why? When people have to pay the AMT, does it actually bring their taxes up to the level that people with similar incomes pay? 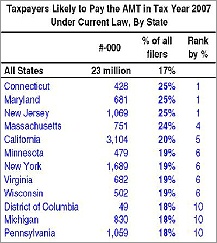 And while details on how to fix the AMT are scarce right now, the topic's political expediency is quite evident.

Residents in the Northeast, northern Midwest and California, all key electorate sectors for any future president, will be hardest hit by the AMT unless Congress extends current legislation exempting millions of filers from the parallel tax system.

The reason: Those states have higher average incomes and higher state and local taxes that cannot be deducted under the AMT.

Even if you haven't yet dealt with the AMT, you could in a few years, regardless of where you live, if Congress doesn't act to offset the potential problem. 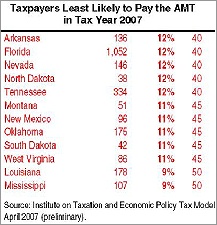 ITEP, the Institute on Taxation and Economic Policy, compiled data that details which states currently face AMT danger; it was published by Citizens for Tax Justice. The tables here show the top 12 states (the blue list) whose residents are most affected by the AMT and the 12 least-affected (red) states.

If your state isn't in these most/least groups, check out the full list.

And keep a close eye not only on your potential AMT tax return hit, but also your Representative and Senators as they try to tweak the system.