Do you have today's party planned? You know. The one to celebrate April 30 being National Tax Freedom Day.

Tax Freedom Day, a registered trademark of the Tax Foundation, is the day that we finally have enough cash to pay all our year's tax bills at the federal, state and local levels.

That doesn't mean we can quit paying our taxes. If only! It just means that essentially, every penny we've earned prior to today is now enough to cover this year's various tax obligations.

This year's National Tax Freedom is April 30, the 120th day of 2007. We've just worked four full months to make the the IRS and state and local tax collectors happy.

But since then, the big tax day has arrived later each year.

There is good news, though. This year's Tax Freedom Day is still slightly earlier than it was in 2000, when the economic boom, the tech bubble and higher tax rates pushed tax burdens to a record high. Tax Freedom Day 2000 was postponed until May 5.

Your state tax mileage may vary: Of course, since the tax burdens in each state vary, so does the actual Tax Freedom Day for each state. 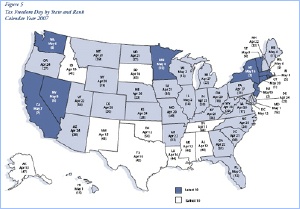 The map above shows the various Tax Freedom Days across the country; click on it for a larger view.

Tax Freedom Day has already arrived for residents of 33 states, starting in Alabama and Oklahoma on April 12. Ohioans were the most recent celebrants, with the Buckeye State's Tax Freedom Day arriving yesterday. And Virginia's taxes-are-paid day coincides with today's national freedom day.

Our freedom from taxes day here in Texas fell on April 19, although it apparently went unnoticed. The hubby and I didn't a get a single invitation to any Tax Freedom Party. Of course, we were out of town and didn't even think about throwing one ourselves either.

Other states with heavier tax burdens are still awaiting their official Tax Freedom Day. In California, it doesn't arrive until May 7. New York's is on May 16. And the latest date is in Connecticut. Tax Freedom Day won't be celebrated in the Nutmeg State until May 20.

A surprising one to me is Nevada, one of the no-income-tax states. But apparently, Silver State tax collectors snare residents with enough other state and local levies to push Tax Freedom Day there until May 8. Similarly, Floridians, who also don't face a state income tax, have to wait until May 2 to have earned enough to pay all their tax bills.

Where our money goes: While the Tax Foundation acknowledges that we all spend a good deal of our time working to pay for things other than government, the group's data shows that nothing else is so expensive.

According to the 2007 Tax Freedom Day analysis, Americans will work longer to pay for government (120 days) than we will for food, clothing and housing combined (105 days). The chart below breaks down where our income is likely to go this year; again, click on it to see a larger image. 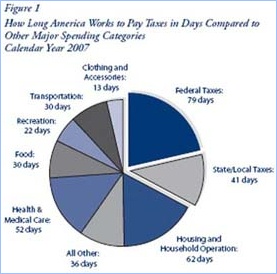 And while government is by far the most expensive item on our tax-paying shopping list, one spending category has grown even faster than taxes: health care. According to the Tax Foundation, the number of days Americans worked to pay for medical service jumped from 29 days in 1982 to 52 this year, a 23-day increase in 25 years. That's almost an extra day of work each year.

Tax Freedom Day crystal ball: Unfortunately, if you were hoping that in the coming years you could possibly plan an earlier Tax Freedom Day party, the Tax Foundation says forget about it.

If current tax laws stay in effect and the economy grows, the organization say taxes will continue increasing as a percentage of income. That means Tax Freedom Day will arrive later and later.

A particular year to watch, or maybe more appropriately watch out for, is 2011. That's when all the federal tax cuts enacted since 2001 are scheduled to expire.

And, of course, some groups take issue with the concept and the Tax Foundation's approach. For dissenting views, TaxProf blog suggests checking out the following perspectives of the Center on Budget and Policy Priorities:

The Tax Foundation's response to the criticism can be found at Analysis of the Center on Budget and Policy Priorities' Criticism of Tax Freedom Day and State-Local Tax Burdens.