It's almost spring, that season when a young farmer's fancy turns to federal farm legislation (my apologies to Tennyson). 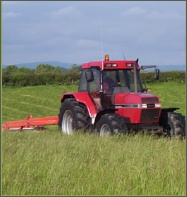 This year, some farmers say a proposed change to the subsidy system would be a hard row to hoe. The Bush administration wants to end farm subsidies to anyone with an adjusted gross income of more than $200,000. Currently, the income ceiling is $2.5 million.

The Administration admits that the number of affected agrarians is not large. While more than 2 million people report farm income on their tax returns, the Administration estimates that only about 38,000 farmers would be cut off. That includes 25,000 farmers and 13,000 others who get rental income from farms.

And most of those folks are concentrated in a few locales. The Associated Press reports that a Bush Administration analysis, based on IRS data, shows that most of the tax returns that report farm activity and exceed the proposed $200,000 threshold are in:

"These are probably investor-owners, people that have a large income and they own a farm somewhere. By any definition, they're doing very well," Agriculture Secretary Mike Johanns said in an interview with the AP.

Many view farm subsidies as a major piece of corporate welfare and support efforts, even relatively limited ones like this, to end the government payments that were designed to support farmers' income and keep crop prices steady.

But the effort also is likely to face stiff opposition, some of it from many in Bush's own party who represent states with large farming constituencies.

Why should you or I care about this, since for most of us the extent of our land holdings is our front and back yards? Because it all is part of that trade-off of who pays for others' tax breaks.

The Agriculture Department says that its farm bill proposals (highlights here) would result in a $10 billion savings from the amount spent on farm programs during the previous five years. During Senate debate last week, Senate Finance Committee ranking minority member Charles Grassley (R-Iowa) proposed a tweak to the subsidy section -- a $250,000 vs. $200,000 income ceiling -- that he said would save taxpayers $1 billion over the next decade.

That amount could come in handy when Capitol Hill has to deal with extending the many, and costly, individual tax breaks that expire at the end of 2010.

What about Oliver? I'm not a farmer. I did participate in 4-H when I was a kid, but in Kermit where I grew up, there were mainly ranches, not farms.

Plus, back then we girls were pretty much restricted to the homemaking arts. My mother did get me a nice sewing kit, shaped like a hat box, for my efforts. I really liked that box, but never quite mastered my grandmother's sewing machine. My most enduring memory: Putting in a zipper sucks!

I do actually know a working farmer. A former coworker and her husband have a cotton farm in the Texas Panhandle and we get an annual update on the enterprise in her holiday letter. I'm happy to say they've managed quite well over the years. 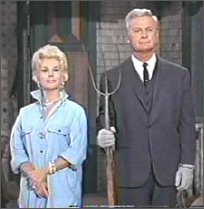 But I must confess that in a word association exercise, if you said farmer, I'd probably say Oliver Wendell Douglas.

Yes, the gentleman farmer of Green Acres (TVLand page here; fan site -- with a link to the theme song and lyrics, too, in case you need them to sing along -- here).

So, naturally, when I read about proposed subsidy cuts for wealthy farmers, I immediately thought of Oliver Wendell Douglas.

I can't remember what Oliver tried to grow, but I don’t think government subsidies were ever a story line. I do vaguely remember him dealing with various government agencies and their red tape. Of course, his main official contact was Hank Kimball, the county extension agent.

As I recall, it was the county extension agent who helped set up the 4-H club back in Winkler County. They're still around, as this Texas Cooperative Extension page shows.

But back to Hooterville.

The hubby says Oliver wouldn't be affected because his farm never made enough money to meet the $200,000 ceiling.

I, however, contend that since Oliver's not a successful farmer, he's living off the substantial income he banked while working in New York. And judging from the type and amount of clothes that Lisa kept in her ramshackle closet, I suspect Oliver might be one of those aforementioned investor-owners the changes target.

And that money and its earnings might be enough to cause Oliver some subsidy concerns.

I don't want to be paying for tax breaks for anyone who makes more money than I do. The end.
I also spotted this interesting article today, and it didn't surprise me in the slightest. I do agree, though, that farm subsidies for people in the richest 5% need to go.
Article link: http://www.taxfoundation.org/news/show/2286.html