All about the auditor

A story I did on tax audits is running over at Bankrate. It details some of the things that might make an IRS examiner look twice or more at your return. 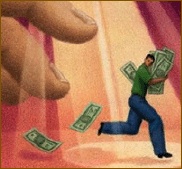 For example, things like income other than basic , home-based business write-offs, noncash charitable deductions, excessive business use of your auto and large casualty losses are some pretty bright red flags.

That doesn't mean you shouldn't claim them if they're legitimate. Just know that someone might come asking. So be sure you can back up your claim.

What's the DIF? Because the IRS can't audit every single return (thank God!), it uses some standard figures for comparison to see if a 1040 is way out of whack. Returns are rated for audit using a mathematical formula called the discriminant function system (DIF). Various weights are assigned to separate items on each tax return, ranking returns for the greatest potential error.

Say you live in a typical middle-America, middle-class neighborhood but are claiming tens of thousands more in mortgage interest payments than your neighbors. Either you are mortgaged and double-mortgaged to the hilt or you're trying to slip something past the tax man.

The tax publisher CCH examined 2004 return stats and came up with these itemized deduction averages. The company emphasizes that these are for illustrative purposes only, so don't necessarily think you're fine if your Schedule A claims are in the same ballpark.

But the numbers can be useful as a general guide as to whether your deductions might seem out of line.

Preparing for an audit: If you do get audited, this story has some tips on how to survive it.

The one I found particularly interesting is do your homework. Did you know you can actually find out what the auditor might ask?

The IRS prepares audit technique guides for its examiners to use when questioning someone who is in, as the agency puts it, "a particular market segment." These guides are for business audits (although if you have rental real estate, you'll want to check out the one on passive activity losses), but they still give you an idea of how comprehensive any audit might be.

For example, the 40-page guide for drywallers addresses issues that these folks would encounter in "their usual capacity of doing work as subcontractors and explains construction audit techniques in this contest." It covers things such as employment tax issues, business accounting methods (cash vs. accrual) and the varying income levels such individuals must deal with as the building industry booms and then slows down.

Fascinating, particularly if your profession is covered by one of the guides, and a little bit scary.

Audit amusement: Brian from Your Money Matters passed along this Jay Leno quip that I was saving for the Tax Glossary (and I still might include it there, too, when I finally get some time to work on it), but given this item's topic, I just had to share it right now:

"Worried about an IRS audit?
Avoid what’s called a red flag. That’s something the IRS always looks for. For example, say you have some money left in your bank account after paying taxes. That’s a red flag.”