An artful look at death and taxes

Knowledge of how your taxes are spent is essential to being a responsible citizen. But that doesn't mean the acquisition of that knowledge has to be boring.

That's the philosophy of Jess Bachman, creator of "Death and Taxes," the representational graph (below) of the federal discretionary budget. I ran across an earlier version of his visual budget last year (noted here), and was thrilled to learn that Bachman has updated it and that he plans to keep doing so. 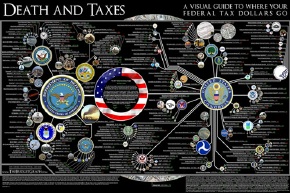 By following the money, Bachman says he hopes "Death and Taxes" will make us ask questions about where Congress is using our tax money and, more importantly, why so much of it goes to some areas of government more than to others.

A few numerical notes: What's government intelligence worth? I know, priceless ... if you can find any. The actual amount, right now, is $44 billion. Other notable expenditures:

You can get an up close and personal look at "Death and Taxes" at this viewer version page. Use the controls at the bottom of the page to increase or decrease the size of the image.