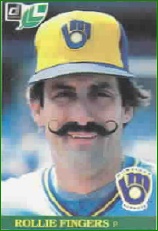 The list also shows a Las Vegas address for Rollie, who earned most of his baseball renown as a relief pitcher for the Oakland A's. Of course, he's probably known almost as much for his handlebar mustache as his pitching prowess.

Fingers' agent John Boggs told the Associated Press that the due tax comes from the pitcher's two terms (1981-82 and 1984-85) as a closer for the Milwaukee Brewers. He added that Rollie's attorneys are working on the issue. I just bet they are!

Kind of makes you wonder what in the tax world is going on up there in Wisconsin, where state officials just sent out a batch of identity theft friendly individual tax packets. At least since Rollie now lives in Nevada, his wasn't among that group.

Of course, given Fingers' alleged tax debt, his is probably not the best financial life to assume!