Wow! It's Tuesday night already?! Time sure flies when you're having tax fun!

It's been two very full days here in Washington at my inaugural Taxpayer Advocacy Panel. In addition to general administrative and orientation sessions, we've had a couple of special guest speakers: IRS Commissioner Mark Everson and Taxpayer Advocate Nina Olson.

In response to a question about the alternative minimum tax, that costly and confusing parallel tax system that affects more taxpayers every year, Everson acknowledged that the situation needs to be addressed: "Both sides of the aisle have spoken. Something needs to be done. The problem is we send people though this whole regular tax routine, then pull the rug out from underneath them and say, 'just kidding.'"

But, added the Commish, AMT overhaul must be done "at the right time with the right political climate. We have a saying: Complexity obscures understanding. I'm for sorting it out sooner rather than later, but I'm not a huge optimist."

Continuing tax confusion: Olson provided a brief preview of her upcoming annual report to Congress and it seems that some things never change. So don't be surprised to see this latest version of the 20 top taxpayer problems to be very similar to past years.

Even beneficial changes can cause problems. Olson specifically cited the new long-distance phone tax refund, which, depending on the number of dependents claimed, will range from $30 to $60.

Most of us will collect the phone cash when we file our 2006 returns. But, noted Olson, there will be around 22 million people who won't have to file a 1040 (or 1040A or EZ) but who will be eligible for the refund.

A major concern is that these folks might fall prey to people who will charge them to file for the refund: "We could see people paying $50 to get back $30." 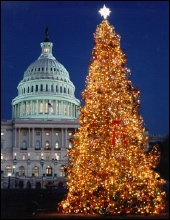 Deep D.C. discounts: It's kinda fun being back in D.C., although it would be more fun if the hubby had accompanied me. Maybe next time.

There are many great things about this city, and the Capitol at night with the tree on the West Lawn is just one of them. Even with all the extra (and ugly) security barricades, the monuments and federal buildings are still incredibly impressive.

Public support for Dubya's Iraq plan keeps eroding, and the Washington Redskins, with a record, have clinched at least a share of last place in the NFC East.

And if you have any doubt as to just how bad things are for these guys, check out the gift shop at the Hyatt here on Capitol Hill. Presidential caps and other tourist memorabilia, along with all the Redskins' tchotchkes, are being offered at 25% off.

Redskins are not doing so well, 'tis true. We fans do have one bright spot: We beat the Cowboys! (Beat the Texans as well...maybe if all the other teams moved to Texas...)

Hi. Phone refunds, that is interesting. I am off on a solo vacation next week. Looking forward to it.