A dance hall fit for angels

This morning, flipping through some of the cable movie channels that are part of our TV programming package but which we don't pay enough attention to, I came upon "Michael." It's a fun movie, notable mostly for the scene where John Travolta dances to Aretha's "Chain of Fools."

But today I stopped the remote flicking not just because I enjoyed the movie, but also because Travolta's "Michael" moves (both dancing and the ensuing fight) were filmed at nearby Gruene Hall, AKA the oldest dance hall in Texas.

As fate would have it, I got in on the movie right at that point. And when it was over and we got an exterior shot of the dance hall, I noticed that its movie make-believe name was "Joe's."

I had forgotten that, but being reminded today of that serendipitous name choice was perfect. Why? Because just last Saturday (Sept. 30), the hubby and I were on the hardwood dance floor where Travolta charmed the women and irritated their dates. And we were at Gruene Hall to see our favorite Joe -- Joe Ely.

Careful blog readers have probably already seen the new Joe item in the left column where I list the Austin-area musical performances we've attended since moving back home to Texas. And, yes, we are on a bit of Joe overload, although we'd argue that that's not possible. But Joe being in Gruene provided us yet one more chance to hear one of our favorite musicians and visit another bit of Texas musical history.

As expected, Joe put on his usual great show. It was particularly enjoyable because the set was different from the last time we saw him in a similar venue (late December 2005 in Helotes, recounted here). But thankfully, he included the always crowd-pleasing "Me and Billy the Kid."

Another great thing about Joe is his willingness to share. In addition to spotlighting his band, especially keyboardist and accordionist Joel Guzman (to the left of Joe in this photo), Joe brought singer Sarah Fox 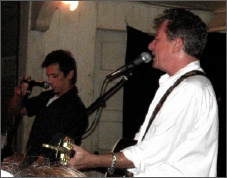 (who just happens to be Joel's wife), on stage to perform one of his (Joe's) songs because he so likes her version. The song, I think, was "Maybe, maybe," but by that time the multiple Dos XXs had kicked in and the live version wasn't as "salsafied" as this clip. Anyway, it was a lovely ballad, and while I thought Joe would take advantage of ceding the spotlight to take a break, he stayed on stage and chimed in on the chorus.

As for the dance hall itself, I was again surprised at how small these places are. It's great from a fan's standpoint, because even when it's a full 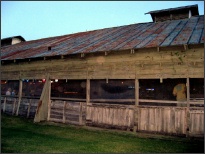 house, you are still able to get close to the performers.

The only downside is that when the place is packed, the crowd fills up the dance floor, making it hard for those who want to take advantage of the building's original purpose. But dedicated hoofers manage anyway, despite the close quarters.

On the Texas music trail: You can read about earlier stops on our to-be-continued historic Texas dance hall/honky tonk tour: Luckenbach, Floore's Country Store in Helotes and the Broken Spoke in south Austin.

More "Michael" Texas connections: On the film's soundtrack CD, you'll find Willie Nelson's version of "What a Wonderful World." The Mavericks, who might not have originated in the Lone Star State, but remain a favorite here (and in one incarnation included guitarist and one-time Ely band member David Lee Holt) contributed "I Don't Care If You Love Me Anymore" to the film.

And while the restaurant where they chowed down on pie might not have been the Blue Bonnet Cafe, whose dessert specialties are extolled in this blog entry, I suspect it was at least inspired by the Marble Falls eatery. Hey, they already were in the area for the Gruene scenes and Austin as well as the state film commission get end credit "thanks."

Plus, Travolta's a big guy whom I'm sure appreciates a good slice of pie. So I wouldn't be at all surprised if he took advantage of the proximity of Blue Bonnet's famed offerings.

So where's the money and/or tax tie-in? More than 1,300 film projects

have been made in Texas since 1910. In the last decade alone, more than 500 have been filmed at least in part in the Lone Star State. Total production costs in those 10 years, according to the Texas Film Commission, comes to $2.79 billion.

That kind of money obviously is a nice boost to the communities that host filmmakers. TFC says that on most features shot in the state, 75-to-80 percent of the crew is hired locally. That's a win-win, giving jobs to Texas movie industry personnel and cutting housing and transportation costs for the production companies.

Lone Star State governments, however, don't get to share so much in the film financial boon. On most projects shot in Texas, the production company is 100 percent exempt from state and local sales taxes on much of what they purchase.

That's not a rebate; it's an up-front exemption, and projects that film for more than 30 days are also exempt from a portion of occupancy tax on hotel rooms. Even more tax incentive: The companies can claim refunds for sales tax paid on fuel that was used for "off road" purposes, such as to run generators or boats.

Some argue, however, that existing tax breaks are not enough to keep Texas competitive when it comes to movie making. The Texas Motion Picture Alliance says the state has lost $500 million in film production in the last three years. Part of the problem, according to the Alliance, is even more aggressive film incentives from neighboring Louisiana and New Mexico.

But even before modern-day production lures, Texas has long been a movie making destination. In fact, Wings, the first film (and only silent one) to win the Academy Award for Best Picture, was made in San Antonio in 1927. You can see the other notable movies bearing a Lone Star stamp here, current through 2005.