Why didn't a Texan think of this?

A Brooklyn tax preparer has been getting big federal refunds for his clients by declaring that New York State is a separate country.

Under the preparer's logic (OK, we'll use that word, advisedly, for now), wages earned in the state are “foreign” income, qualifying NY filers for the foreign earned income tax exclusion.

No surprise that federal officials respectfully disagree with the tax pro, Garry P. Webb-Bey, and have hauled him into court. According the U.S. Justice Department lawsuit, Webb-Bey has frivolously claimed $335,000 in refunds and his clients have received actual IRS checks totaling more than $97,000. You can read (if you register) the whole story in today's New York Times.

I once worked with a guy from New York -- upstate, not the city -- and we had a continuing but good-natured disagreement over the relative merits of our particular home states. In the end, Andrew and I decided that New Yorkers and Texans are pretty much cut from the same cloth: confident (some might say arrogant), determined (some might say stubborn), resourceful and, of course, incredibly intelligent.

The difference just comes down to presentation. For the most part, at least as I see it, Texans tend to hew more closely to the generally accepted social interaction rules of courtesy. 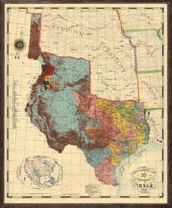 I am surprised, however, that a Texas tax pro didn't come up with this tax argument, despite its patently bogus basis. At least here in the Lone Star State we have a modicum of fact upon which to lay claim to separate country status.

From 1836 to 1845 we existed as the independent Republic of Texas. And it's that Independence Day we celebrate each March 2, not the Dec. 29 date that Texas officially joined the United States.

One true part: Like most tax scams, Webb-Bey's assertion contains a legitimate tax component. Residents of real foreign nations can exclude a portion of their income from U.S. taxation if they meet the requirements. You can read more about the foreign earned income tax exclusion here.

Republic of Texas 1845 map courtesy of Maps of Texas.