Last month's horrendous heat wave might have lessened its grip on the United States a bit, but the arrival of July utility bills are getting some folks hot under the collar all over again.

Our Austin Energy bill topped $300, the biggest electric bill we've ever received. Actually, I was a bit surprised. Yes, this is the biggest house we've ever owned so there's a lot of square footage to cool. But it didn't seem to be as hot as last year, although that may have been because last July we were still moving into the place and the personal energy output of that effort made it seem hotter.

If our electric bill is that high, that of our next-door neighbors, whose A/C seems to run continually (as mentioned in this previous energy-related posting), must be at least $500. Do you think they'd tell me if I knocked on the door and asked? Probably not.

While I'm not pleased about our bill, especially since we follow the recommendations (detailed in this earlier posting) to make sure our A/C units run as efficiently as possible, I should have seen it coming. I hate the heat and am not bashful about using modern conveniences to escape it. It evens out in the winter, as we keep the thermostat lower then and simply put on a sweater and curl up under a blanket. I'm already counting down the days until December's first real cold snap.

At least I get some comfort in knowing that our higher-than-normal electric bill is not unusual. Free Money Finance asked earlier this month if anyone else was worried about their July electric bills, and most who responded were. Yep, hot sweaty misery sure loves company.

Making your house pay for itself: Some people, however, are doing more than setting the thermostat at 80 and cloaking windows with sun-repellent drapes or tinting. They're relying on their house itself to supply its own energy needs.

Known as zero-energy homes, the structures are designed to generate as much energy as they use by combining state-of-the-art, energy-efficient construction coupled with renewable energy systems. This includes using thick concrete blocks as the home's basic structure, to absorb both heat and cold and then distribute it as needed throughout the house. The residences also utilize the sun to heat water and distribute energy, as well as special flooring to help keep the house warm during the winter.

Builders of a zero-energy home in the Dallas area say these techniques help make that residence's utility costs roughly equivalent to homes 1/3 the size. The four-bedroom, 3,800 square foot home averages less than $70 a month for electricity and gas. When you factor in the solar photovoltaic panels, the net cost to operate this house should be zero, according to the home's manufacturer. 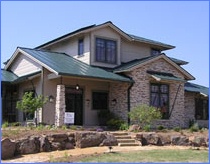 As you can see from this photo (courtesy of Anderson Sargent), the house looks like many other contemporary homes in suburban America. It has all the modern amenities. It just makes sure the house itself is able to sustain them.

Here in Austin, my electric company and the City Council have created a task force to study the possibility of adopting building code changes that would require all new single-family homes in the Texas capital to be zero-energy capable by 2015. This would make these newer homes approximately 60 percent more energy efficient than homes built to the current code.

Of course, the cost of the houses also probably would be more. But the hope is that that payment on the front end would be offset by greater savings on energy bills once the owner moves in. Savings also would depend on how long you live in the house.

But as we suffer through yet another summer full of triple-digit temperatures day after day, it might just be a price that Austinites and other homeowners nationwide will be willing to pay.

You can find more details on zero energy homes, including basic construction schematics, in this Department of Energy document.

The Home Energy Saver, sponsored by the U.S. Department of Energy as part of the national Energy Star Program, computes a home's energy use based on methods developed at Lawrence Berkeley National Laboratory. Users can estimate how much energy and money can be saved and how much emissions can be reduced by implementing energy-efficiency improvements.

You start by entering your zip code, which will then give you and instant initial estimates on average energy costs in your areas. By providing more information about your home, you'll get customized results, along with energy-saving upgrade recommendations.

Digging in to save: The zero-energy homes are esthetically more appealing, at least in my opinion, than efforts to save energy via earth-sheltered homes.

Plus, I'm a tad claustrophobic when it comes to housing and have always liked a more open design. Maybe my perspective is shaped by the first post-wedding apartment we shared in Washington, D.C. -- an English basement with only two "real" windows and we still had to look up to see the street level goings on. We made darn sure in future home hunting that the house offered light, light, light opportunities!

Given our penchant for open design, I don't think we'll be moving into anything that even remotely resembles these literally "green" earth-encased houses in Keldur, Iceland.

You can check out some more modern and fashionable earth-sheltered residences at Davis Caves, EarthShelter, Rocky Mountain Research Center and Earth Sheltered Technology.

Ths was a very informative post with great links. We've been looking into ways to reduce dependence on oil and electricity and though we have nearly made up our minds, it was helpful to access the variety of info you presented.

This post is included in Austinist's best of the blogs for this week.

If "zero-energy homes" were desirable, the goverment would not need to mandate them via force.

I was pleasantly surprised when I opened my last electric bill. I had used 10% less enery than I did in the same period last year. And it was $40.00 less than the previous month's bill. The only thing I've really been doing differently is making the bedroom door is closed when I leave the house. Since the bedroom is on the west side of the house, I figure by closing it off, and not having the sun blasting in to that room in the afternoon and go straight out into the hall were the thermostat is, the air conditioner isn't running as much. I also keep the shades pulled and closed as well.

I'm writing a research paper on tax incentives for residential investment in solar power. I.R.C. sec. 25D allows for a tax credit of 30% of the cost of "photovoltaic property expenditures" with a maximum yearly credit of $2,000. There are other credits for energy efficient building choices in sec. 25C and the website after my text here details the different approaches the states are taking to lower cost barriers of purchasing home grown passive power.