One Member of Congress wants to nickel and, well, nickel us.

U.S. Rep. Jim Kolbe, who represents southeastern Arizona, read those stories on the high cost of producing pennies and introduced a bill to do away with the single-cent coins.

The Currency Overhaul for an Industrious Nation Act, or as the Congressman has christened it, the COIN Act -- I swear, I believe that 90 percent of the time lawmakers come up with the acronym and then figure out a legislative name to fit it -- would, in part, round all cash transactions to the nearest nickel.

The required rounding would be both up and down, using this system detained in the bill:

(A) ROUNDING DOWN- If the resulting sum ends with 1 cent, 2 cents, 6 cents, or 7 cents as the final digit, the amount of cents in the sum shall be rounded down to the nearest amount divisible by 5 for those individuals seeking to make payment with legal tender.

(B) ROUNDING UP- If the resulting sum ends with 3 cents, 4 cents, 8 cents, or 9 cents as the final digit, the amount of cents in the sum shall be rounded up to the nearest amount divisible by 5 for any person seeking to make payment with legal tender.

I don't know about you, but I already have trouble getting my correct change, pennies or not, from some cashiers, even when the register computes the precise amount for them. 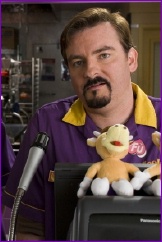 The thought of waiting for the guys who failed Clerks II auditions to figure out the amount divisible by five before calculating what I owe, much less what I get back from my $5 bill, for a Slurpee and bag of chips just doesn't seem practical.

And what about those registers? Just how soon will NCR and other register makers get around to retrofitting all those machines? It's been a decade since gas pumps with credit card readers appeared and I'm still running across a few of the old style, pay the kid in the booth types.

At least H.R. 5818 exempts "transactions the total amount of which is 2 cents or less," as well as credit and debit card transactions and other electronic transfers from all this mathematical mayhem.

The bill also calls for federal money makers to look into alternative metals for coinage production and to examine ways to replace the dollar bill with a $1 coin; the merging of the Bureau of Engraving and Printing and the U.S. Mint into the Federal Reserve; and the issuance of commemorative quarters for the District of Columbia and U.S. territories to be added to the 50-state set.

Three of Kolbe's GOP colleagues have signed on as cosponsors (Tom Feeney of Florida, Jeb Hensarling of Texas and Roger Wicker of Mississippi) and the bill been referred to both the Financial Services and Budget Committees.

But don't worry too much about having to carry a calculator with you on every shopping trip to double check your change. This measure is likely to sit untouched, since Congress has plenty of other things to occupy it in the waning days of the 109th session.

Like figuring out how to force the repeal of the estate tax, which doesn't have a critical deadline until 2010, by tacking it onto a few other tax measures, including the relatively miniscule deductions for college tuition and fees and state sales taxes that affect so many more taxpayers and which expired last Dec. 31.

It's nice to know that some of our federal lawmakers (i.e., the GOP leadership) have their priorities in order … <sigh>.

I think that it would be a great idea to drop the penny. I also think that this isn't very important considering the stuff going on at the moment.

Kay, I fully agree with your evaluation that Congress should be working on something more important ... in fact the COIN acronym stands for Counter-Insurgency operations in the military ... something I see we have set up training camps in Iraq for, since all the huge training facilities of the US Army here in the CONUS don't bother to train soldiers for what they have to do in Iraq .... Hmmm, there's a thought for Rep. Kolbe ... he won't have to learn a new spelling.

In a practical sense, though, living in a "copper less" environment is not hard at all. The former British sixpence coin was exactly the same size a US penny and when I was stationed in the UK back in the "old money" days, we Americans were not allowed to use or even possess US pennies. All the facilities on the US bases that dealt with money thus had to round up and down. It seemingly made very little difference to me ... and a penny used to be worth more in those bygone years.

Frankly, I'd be a very happy camper to see the US penny disappear ... they are an anachronism and a nuisance ... but then I'm an opinionated curmudgeon ;-)