I was fingerprinted today. 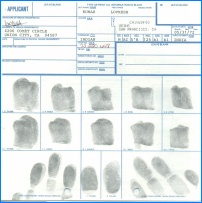 Note to family and friends: Quit freaking out. I was not arrested. How could you even think such a thing?!? So there is no accompanying mug shot a la Smoking Gun's infamous rogues gallery.

No, I simply had to have the digits inked as part of a background check for a tax-related position for which I'm applying.

Not to be overly mysterious, but I'm not going to elaborate right now. My application is to a group that I'd really like to be a part of and I'm afraid if I say any more, I'll jinx my chances. Heck, I've probably jinxed them by writing this much, but I couldn't let something like my first (like there will be future) fingerprinting go unblogged!

The hubby and I had our thumbprints scanned when we got our Texas drivers licenses. But this was the whole Five-O routine, although at a private passport photo place rather than a jail.

The fingerprint guy kept telling me "relax your hands, relax your hands," but it is definitely a weird process, so it's kinda hard to relax, especially with hubby dear sitting over there in the corner smirking the whole time.

So now, or soon, I'll be in "the system," or some system, anyway. That, too, is a bit disconcerting, even though I know I have nothing to worry about. Of course, that's what I thought until I checked my credit report last year and found some stranger had impersonated me.

And now that I think about it, I could have a tiny bit of a problem if the Secret Service lifted prints off of all those letters I've mailed to presidents over the years. The correspondence seemed warranted at the time. We shall see.

In the meantime, as I wait for the final word on both the background check and the actual group membership, I'm going to play amateur CSI and study the photocopy I made of my fingerprint card, using the info from this site, as well as this FBI one.

Mug shot mania: Poor Nick Nolte. I so enjoy his movies (rent The Good Thief), but I have to laugh every time I see his supremely bedraggled mug shot. And the Republican Party obviously has a professional photographer on standby, since the shots of Rush and DeLay look better than some family portraits I've seen!

E-mail misdemeanors: Some folks might argue that I should be booked for spamming their e-mail boxes earlier today.

This morning, before heading out to the fingerprint place, I shot off a message to the national office of the Association for Women in Communications. Or so I thought.

It seems, however, that my inquiry went to the full membership. People in every state. Lots and lots of members.

Yes, as one e-mail recipient noted, I am horrified, mortified and swamped with replies.

Now my box now is full of (a) undeliverable message notices (yay!), (b) messages saying my mail was caught (thankfully) by a spam filter and went no further, (c) autoreply messages telling me the person is not in today because she is taking a long 4th of July break, and (d) mystified AWC members who opened my message.

I've spent the better part of the day sending those who replied another message explaining why they heard from me in the first place. Basically, I wanted to assure everyone that their names were not part of some hacked-into list. Most were relieved to get the second note letting them know that the problem was simply an e-mail idiot in their midst.

I'll be doing more of the same on Wednesday, I'm sure, when all those autoreply AWC members return to their offices and e-mail boxes.

There is, however, one good thing about my errant message. Well, two, actually, the first being that my message didn't have any questionable language in it.

The second, more important, development is that my mistake has reconfirmed what I already knew about the group: Association for Women in Communications members are friendly, helpful and forgiving.

Every one of the replies I've received has been gracious. Most just wanted to let me know that they got a misdirected e-mail so that I could send it to the proper place to get my problem solved. Or they didn't want me to think that my question was being ignored. Several even suggested other people to contact.

And quite a few commiserated with with me, sharing their own tales of e-mails gone bad.

So I salute all my fellow AWC members! Thanks for your understanding and offers of help and most of all for your collective good humor! I'm proud to be one of you!