A friend wrote regarding the recent changes in the Tax Increase Prevention and Reconciliation Act (TIPRA) to the so-called kiddie tax.

The provision in question concerns the age of young investors and how it affects the tax rate applied to their earnings. The applicable age used to be 14. Now, thanks to TIPRA, the 2006 age is 18.

My friend read a Wall Street Journal item that suggested parents with children who might be affected by the kiddie tax consider investments that generate little or no current taxable income, such as U.S. savings bonds. Owners of Series EE or Series I bonds can defer counting the interest they earn as taxable income until the bonds reach final maturity or they're redeemed, whichever is first.

That prompted her e-mail: "Doesn't this mean that the tax break is extended to kids under 18 now? Why would parents buy savings bonds for their kids, who would be eligible for a kiddie tax break? Why am I having such a difficult time understanding this?"

I'll answer her third question first. You're having a hard time understanding this because the popular reference to the law as the "kiddie tax" is imprecise and counter-intuitive. 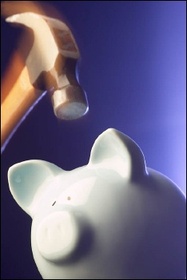 "Kiddie tax" sounds like it would be a good thing, since "for the children" is such a pervasive political refrain.

You hear "kiddie tax" and you think that it means the kid's money will be taxed at his or her usually lower tax rate.

But it actually means the opposite. Under the kiddie tax, a portion of a child's investment income is taxed at the parents' higher rate.

The tax was created in 1986 because some parents had been putting investment accounts in their child's name so that the earnings would be taxed at the child's low tax bracket (usually 10 or 15 percent in 2006) rather than at the adults' higher one (which could be as high as 35 percent this year).

To stop the income shifting, the law was changed so that some of the child's investment money would be taxed at the parents' higher rate.

The tax law still does provide favorable treatment for some of a child's earnings. TIPRA didn't change that.

In 2006, the first $850 of a youngster's unearned income -- money from investments such as stocks, bonds, CDs and savings accounts -- is not taxed at all.

And the next $850 is taxed at the child's income tax rate.

But when the kid's earnings go over $1,700 this year, then the IRS will collect on that money using the parents' tax rate.

Previously, this higher parental tax bracket applied until the kid hit 14. After that birthday, taxation went back to the child's rate.

I don't know why age 14 was picked back in '86. Maybe Congressional number crunchers figured by that age a child is likely to be working after school and making enough money, earned and unearned, so that the government would get a decent tax cut anyway. Or maybe it just fit the budget contortions at the time.

TIPRA, however, has upped the age limit by four years. And the choice of age 18 definitely was designed to bring in more money to the U.S. Treasury. Senate staff estimates that the change will raise $2.1 billion over the next 10 years, mostly from upper-income taxpayers.

That money will come because now when Jimmy or Janie has investment proceeds exceeding $1,700 the money will be taxed at Mom and Dad's tax bracket until the youngster turns 18. The child must wait until that milestone age before the earnings are taxed at youth's lower tax rate.

This is going to pose some problems for families who've opened college savings accounts in their children's names. Even more distressing is that the age change is retroactive; even though TIPRA didn't become law until May 17, the kiddie tax age change covers all earnings from Jan. 1.

Taxpayers who paid estimated taxed on their child's investment income might discover that their April payment is short because they were counting on it being taxed at their 15-year-old's tax rate.

Mel Schwarz, principal at Grant Thornton's national tax office, expressed his dismay to WebCPA: "Kids can work at summer jobs when they're 15 or 16 to save for college. Do we want to tell them, 'You can save your money, but if you earn interest on it we'll tax you on Dad's rate and not your rate?' This is a disincentive for teenagers to save the money they've earned."

Today's Tax Tip: If your child has investment accounts, in addition to the previously mentioned savings bonds, you might want to consider putting the money in instruments that produce long-term capital gains. These are taxed at 15 percent instead of the higher, ordinary income rates.

Other options include 529 plans or various trusts. Check with your financial and tax adviser to determine which one works best for you and your young investors.

Here's a breakdown of 2006 taxes a child might face:

And you can read more about the kiddie tax at Economic Trends, TaxGuru, the Futcher-Henry Group and this Bankrate story.

Hats off to TIPRA, I think this was a much needed change!