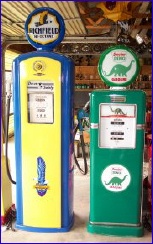 Have you filled up your car lately? How long did it take fellow gas station customers to revive you? (You like to think they were being Good Samaritans. In reality, you passed out in the lane blocking access to the next pump.)

For Americans in love with and addicted to their autos and trucks and vans and yes, still some SUVs, gasoline prices are creeping into the realm of truly shocking.

The latest Lundberg Survey reports that in the last two weeks, self-serve regular jumped nearly a quarter a gallon. Lundberg now places the national average at $2.91 a gallon. Here deep in the heart of Texas, the ostensible home of oil barons, we're a little below that figure, but not much.

Motorists here and elsewhere have begun making enough noise that some politicians are enunciating what is usually a dirty word to them: taxes. An Associated Press story in the Washington Post says that Sen. Arlen Specter (R-Penn.), chairman of the Senate Judiciary Committee, is advocating a windfall profits tax, along with eliminating the antitrust exemptions for oil companies, in order to provide relief to drivers.

The possibility of a tax targeting oil company income came up last year (and was blogged about here). And now we are well into an election year.

Let's say we're being pragmatic, not cynical, when we note that Specter and his colleagues who support legislation aimed at oil companies are hoping that if peeved pump patrons vote, they will remember the politicians a bit more fondly this November.

Politics aside, some drivers already are voting with their feet, putting their right one firmly on the accelerator of more fuel-efficient vehicles, notably hybrids.

And buyers of some of these vehicles since Jan. 1 will be able to turn their quest for less pain at the pump into tax savings on their 2006 tax returns.

Sure, for the last few years (including 2005) taxpayers who bought a vehicle that combined an electric motor and a gasoline-powered engine already got a tax deduction. The Energy Tax Incentives Act of 2005, however, turned that deduction into an even better tax credit.

Deductions reduce your amount of taxable income, generally meaning that your tax bill will be lower. But a credit gives you a dollar-for-dollar tax break. Once you figure your taxes, you can subtract the allowable credit directly from that amount. That means with a $500 credit, your $1,000 tax bill is cut in half.

Of course, it's not just any fuel-efficient car that'll get you this tax break. The vehicles must meet government standards. And the actual amount a vehicle will save you on your taxes depends upon its fuel economy and total expected lifetime fuel savings based on prior year fuel efficiency numbers.

Don't worry. You don't have to do the figuring. The manufacturers have taken care of that for you and the IRS has released a list of eligible autos and their tax-saving potential:

As is usually the case with tax breaks, there are a few caveats.

First, this credit is nonrefundable. That means that if you owe Uncle Sam $1,250 dollars on your 2006 return, your Ford Escape hybrid will only zero out your tax bill. You'll lose the other $700 of that auto's credit value.

Also, the law that created the credit also put a limit, based on manufacturer sales, on it. Purchasers can claim the full credit only if they are among a particular make and model's first 60,000 buyers.

For the first two quarters a manufacturer sells that number of vehicles, the credit applies in full. But in the next quarter, the credit is cut by 50 percent. In the final quarter, it will be worth only 25 percent of the original amount.

And if a manufacturer hasn't reached that 60K mark by the end of 2010, it doesn't matter. The credit is scheduled to expire then.

Today's Tax Tip: You can read more about this new tax break in this story.

This post was updated at 4:35 p.m., April 25, 2006, to include two more vehicles the IRS added to the tax-credit-approved list after the original version was published.