Putting up with crap

We've all been there. Your boss or coworkers do stupid things that make your job harder. Your family makes demands of you, financially or emotionally or physically, that, because they are family, you tolerate.

We even have to put up with crap from strangers. The idiot that cuts you off on the highway. The moron who takes 23 items to the express checkout line. The bozo at the Post Office who wants to look at every available stamp design before buying one to put on a single letter.

It's a handy euphemism. Just a hint of scatology to emphasize your disgust, but not so much as to make your grandmother do more than mildly "tsk, tsk" when you use it.

The Urban Dictionary, as part of its ninth definition of crap, says it's the closest word in the dictionary to being a cuss word without actually crossing that line and is a great word to say repetitively [see two paragraphs earlier] without other people getting mad at you since you aren't cussing.

Plus, depending on your mood and just how much you have to put up with, you can easily amp up its resonance (and get it closer to the more literal definition) via simple vocal inflection: "Can you believe the crap I have to deal with?"

Thankfully, most of the time, it's a metaphor. Except for us, late last week.

We literally had to deal with crap on Thursday morning when our across-the-street neighbor had an organic landscaper do some work. Hey, we're all for reducing chemical lawn treatments and the runoff that is choking waterways. And since we live just up the hill from Lake Austin, we've got no problem, in principle, with natural fertilizer.

In fact, we've been on the other side of the crap equation. When we lived in Maryland and had to do our lawn care chores ourselves (the homeowners' association took care of that in Florida), the manure spread was an annual spring rite. My husband, a better and more patient gardener than I, would bring home bags of it.

The only problem was if he didn't get to the actual spreading as soon as he brought the stuff home. If it sat in our garage too long, the place wasn't fit for parking the cars.

But that wasn't the fertilizer factor we initially had to deal with this time. It was the noise of its application. This company had a huge compressor that it used to spray the stuff. That's what first caught our attention.

The sound was incredible. In Florida, we used to live through the noise of annual power washings of pool coverings. It was the only way to get the moss and mold off those aluminum frames. Plus, since we did it too, we didn't feel right grumbling about everyone else's cleaning efforts.

But this machine was like four of those Florida power sprayers. I guess you need an extra oomph to disperse the, ah, crap.

OK, so we were annoyed for about an hour. But then it was over and we moved on. Such is life in suburbia.

Thursday night, though, we had to put up with the neighbors' crap again.

We're sitting in the den, watching some TV, doing a little reading. For the last week, evenings here in Austin have been very pleasant. Clear, cool and with a nice little breeze, so we've been opening our windows to take advantage of the fresh air. Suddenly, the air wasn't so fresh. 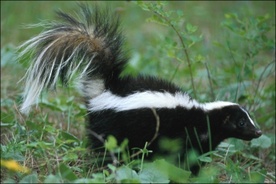 Almost simultaneously, the hubby and I looked at each other. "Is that a skunk?" I asked. We had heard one of the neighbor dogs growling earlier and thought maybe a critter had ventured into the area. But the smell was coming through all the windows on all sides of the house. A herd of skunks?

When we went to close the front windows, we realized the source: Not living animals, but animal leavings from the neighbors' yard. Apparently, the stuff these companies use isn't too pungent -- until it gets wet. And their sprinkler system had just come on.

Thankfully, the smell only seems to accompany the first soaking. Friday and Saturday night were OK. However, we did have another neighbor issue on Saturday that took away from our enjoyment of open windows.

Up the hill from our house, another mechanical noise interrupted us last night. It sounded like someone didn't think it was cool enough to survive with just open windows, so they boosted their AC unit with a jet engine and decided to run it full blast.

After about 45 minutes, I just had to find out what it was. As I walked around the corner, I got the answer. A Stanley Steemer crew was hard at work, their van's compressor running wide open. This particular neighbor evidently needed professional help to clean some crap from his carpets.

TODAY'S TAX TIP: Tired of taking it at the office? Look for a new job. As long as it's in the same field as you're currently employed, you can write off your job-search on your tax return.

Of course, to get the tax break, you have to itemize. Then you have to have enough job-hunt and other miscellaneous expenses to reach a total of 2 percent of your adjusted gross income. And then you can only deduct that amount that exceeds the 2 percent limit.

Still, every little bit of a tax break helps. Unfortunately, we generally have to put up with IRS filing crap to take most of them.

This is funny. I've had to deal with similar crap during the recent years...at one point a construction crew was remodeling the building next to mine and left a light on all weekend, which shone into my windows. It was bright enough to wake me up several times. I'm sorry to hear about the carpet cleaners, though. Maybe you can talk to them about keeping it down it the future?

Great post! I think crap is probably my second favorite word in the world. The first being, well, you know the "D" word. Thanks!