Baseball has been very, very good to Barry Bonds, but it seems that wasn't quite good enough for the San Francisco slugger.

Bonds, along with baseball fans and non-fans alike, watched raptly in 1998 as the friendly battle between Mark McGwire and Sammy Sosa played out en route to the new single-season home-run record. McGwire's 70 gave him the record. He and Sammy hugged. The world and Major League Baseball, which sorely needed some positive press, smiled.

And Bonds seethed, deciding that he, too, wanted some of that attention, adoration and acclaim. So he turned to steroids for the added oomph. 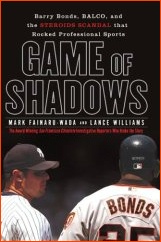 So says "Game of Shadows," a new book due out this month. In it, two SF Chronicle reporters look at Bonds alleged use of performance- enhancing drugs, as well as the subsequent testimony about steroids before a federal grand jury.

Yeah, tell me something I didn't know. Not to take anything away from the writers of the book. They worked on it for two years and I'm sure they and their editors are confident that it accurately reflects the questionable issues that have dogged Bonds since he wrote his name above McGwire's in the record books by slamming 73 taters.

With the book's imminent release, it's been piling on time again for Barry haters. He's regularly castigated for being:

Now I'm not saying any of the above is acceptable. The sage words of my mother still apply: "Just because everyone else is doing it isn't a good reason. If everyone else jumped off a cliff, would you?" Even as a teenager, I realized she was right.

Barry, however, did allegedly jump right off that cliff and into the steroid pool.

The irony here is that these guys obliterated a record that MLB deemed questionable simply because schedules changed over time. But, as Tim Dahlberg notes in this article, the new home run record, first by McGwire and then Bonds, is a joke.

And it's a sad joke that MLB implicitly perpetuated.

While these guys and many more were injecting or applying or however else ingesting steroids, MLB didn't do a damn thing. Steroid use by pro baseball players was not illegal back then. Sure, it was stupid and ill-advised, but not illegal, meaning, by league standards, Barry and the other Boys of Summer weren't breaking any MLB rules.

And MLB didn't make an effort to change those rules until public outcry and grandstanding members of Congress started raising the steroid issue.

So by all means, demand that Barry now adhere to his sport's rules and nod approvingly when MLB now punishes all players who violate its new steroid ban.

But don't pat MLB on the back for such belated discipline.

The league could have put an end to such abuses, which endanger not just the game's reputation but players' lives, much earlier and without being publicly prodded to do so.

MLB punishment, however, is probably the least of Bonds' concerns. He now knows the line he has to toe while at work. Some of his other activities, peripherally related to baseball, could prove much more costly.

Law enforcement reportedly is also looking into possible income tax evasion, money laundering, evading federal banking laws and perjury charges against Bonds. Seems a woman who identifies herself as an ex-girlfriend says Bonds gave her $80,000 cash to help her buy a house, along with instructions to deposit the money in four banks, with no deposit to exceed $9,999.

That would the transaction under the banks' $10,000 reporting trigger. It also would help deflect any undue inquiry into gifts that exceed the annual gift tax exclusion amount ($12,000 for 2006).

Barry, Barry, Barry. 80 grand is nothing to a guy making the millions you do. What were you thinking? Everyone knows that it wasn't murder that sent Al Capone to prison, it was tax evasion.

You just don't mess with taxes or the tax collector!

3,000 miles away: In Washington, D.C., another Barry has had to deal with criminal tax issues.

Marion Barry, current D.C. council member and former four-term mayor, was sentenced on March 9 to three years of supervised probation for misdemeanor charges based on his failure to file income tax returns.

Barry also has to negotiate settlement of his tax-debt, which could be as much as $246,000 for federal and District returns that he didn't file from 1999 to 2004.

You can read more on the latest travails of the man referred to, at least while we were residents of the National Capital area, as "Mayor for Life" in this Washington Post story.