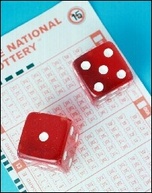 You are reading this today because our Texas Lottery numbers didn’t pan out.

I can hear my friend and Boomer Bucks columnist Barbara Whelehan tut-tutting. She’s right when she says expecting to get rich by winning the lottery is just not realistic.

The odds of any one of us winning are not good, even if you can understand them. But, as an old TV ad for the Maryland state Lotto used to remind us, “It could be you!”

It was me a couple of times. Maryland offered a lottery subscription. Pay your $50 or $100 or whatever for however many tickets you wanted to purchase each week, pick your numbers or tell them to randomly draw them for you, and for the next year you didn’t have to remember to run to the corner market when the jackpot neared a record payout.

Even better, when you won, Maryland would just send you the check.

So I bought a subscription (quiet there, Barbara).

Immediately after signing up, I got a $35 check because four of my six subscription numbers matched that week. Hey! This thing really works!

Then nothing for 51 weeks.

We moved to Florida and it could no longer be me since Maryland wouldn’t accommodate mail-order gambling. So I reverted to picking up the occasional Sunshine State ticket at the local Publix. I won a couple of times, once as much as $76 bucks.

I’m having less luck here in my home state. I’ve been back for less than a year, but Texas’s stupid Lotto game is really starting to tick me off. See, it’s the game’s methodology, not my bad luck that’s keeping me working for a living. And the Lottery Commission knows it.

Currently, to win the jackpot you’ve got to match five numbers and -- and it’s a big and -- a bonus ball number. The commission is considering jettisoning the bonus ball and reinstating the old system, where you just had to match six numbers, any order.

When the bonus ball was added back in 2003, it lowered the odds of winning the jackpot from about 1 in 26 million to about 1 in 48 million. I’m sure going back to just me against 25,999,999 other Texans will make all the difference.

Even if it doesn’t, I’ll keep buying a ticket now and then because I don’t want to let go of the dream.

Ah, the dream. An intoxicating fantasy of instant, take this job and shove it, you should have been nicer to me, nahhh-nahhh-nahhh wealth. At least the $1-per-draw gets you the dream until the numbers are selected.

That, along with the jackpots, keeps people worldwide betting.

It’s Super Bowl XL time and literally millions of dollars will change hands. When that kind of money is involved, we amateurs are relegated to the relatively paltry office pools, while people who know what terms like freeroll and 20-cent line and vig mean will head to Vegas.

Lost Wages, where what happens there, stays there, along with all your disposable income, is the only place in the U.S where sports bets are legal. But not every gambler can head to the Silver State. Instead, they boot up the trusty laptop.

Yeah, Internet service providers will be wishing they got paid by the minute on Sunday as droves of avid sports fans boost their excitement level by electronically placing a little money on the game. And although it’s illegal in the U.S., around half the online bettors will be logging on from the comfort of their Main Street America homes.

A lot of them, as noted in this MSNBC story from last year, bring a day trader approach to their betting in efforts to make as much as possible. Heck, some are even betting on which ad TV viewers will choose as their favorite.

Online wagering infuriates government officials and frustrates the IRS, which would love to get its piece of this massive betting pie. But, as this story points out, the odds of that happening are about as good as my chances of winning the next Texas Lotto drawing. It’s up to $62 million, by the way.

You can bet, however, that the tax collector and I will keep on trying to cash in our respective, and elusive, jackpots.

International attitudes: Outside U.S. borders, gambling is more de rigueur. A few years ago when the hubby came back from attending the Ryder Cup matches in Birmingham, England, he told how folks nonchalantly went in and out of a betting parlor set up in a tent right there at the golf course. They were placing bets on the pros who, just yards away, were trying to make the green in two.

The hubby swears he didn’t bet, at least not much. I believed him because he’s my husband. Also because nothing outrageous showed up on the subsequent credit card bill. And no big lug with a Cockney accent ever came calling from across the pond.

We have a winner! This entry was selected for inclusion in the Feb. 5 edition of the Carnival of Personal Finance. Roll those dice again, baby!

If I got the right texas lottery results I could be rich right now. Would I have to pay taxes off of that money? I imagine I would have to. How much?

Great post, even though I completly disagree about the lottery :). Enjoyed reading it in contrast to my lottery post in the carnival of personal finance though. Keep up the good work.