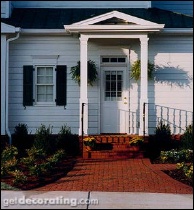 The first was from the Wall Street Journal, where reporter Ruth Simon looks at Census Bureau data that indicate that after climbing steadily for a decade, the United States' homeownership rate has leveled off. If you have a subscription to the paper, you can read the full story here.

If you don't subscribe, here's a telling excerpt from Simon's article:

"It's not entirely clear why the homeownership rate seems to have plateaued. Some economists say that the new data could be a sign that declining affordability is finally taking its toll on first-time home buyers."

Then today, the New York Times tells us in this story that over the last decade, homeownership among minorities passed the 50 percent threshold, crossing that mark in 2004. That positive news, however, belies a troubling trend.

According to the story by Vikas Bajaj and Ron Nixon, "… in the last several years, neighborhoods with large poor and minority populations in places like Cleveland, Chicago, Philadelphia and Atlanta have experienced a sharp rise in foreclosures, in some cases more than a doubling … ."

It seems that many home buyers are learning the hard lessons of getting and keeping, and that they're two different things.

For some, based on the Wall Street Journal report, getting into a home is the major problem. All the attention lately has been on a housing bubble, worrying whether owners will end up losing money on houses they purchased a few years ago.

But that bubble has, in essence, acted as a force field for many buyers, especially those looking to get into their first home. This phrase from the WSJ article jumped right out at me: declining affordability.

We bought our first residence, a condo, in the Washington, D.C., suburbs back in 1982. To get into the two-bedroom apartment (with two baths, small terrace, separate dining room and a nice little wood-burning fireplace in a corner of the living room), we had to sell my husband's car to come up with the down payment. My car was newer, so we kept it.

The few thousand we got for his Pontiac Grand Prix was enough to get us into our first home. I can't imagine any young couple being able to pull that off nowadays, especially in the national capital region or any other major metropolitan area. Again that phrase: declining affordability.

Lower interest rates over the past few years have helped a lot of buyers get into some of today's pricier homes. But when prices kept going up for basic housing, not just for estate-type residences, many buyers had to look for creative mortgage options: ARMs, nothing-down loans, bridge loans to cover a down payment, interest-only mortgages. The list is limited only by the lender's and buyer's imaginations and willingness to take a chance.

Of course, leveraging yourself to get into a house is nothing new. When we bought each of our houses, we tried to stay within our means. On the ownership ladder of each neighborhood, we were near the top in overall financial stability. But in each community, we also saw a lot of people hanging on by their fingernails to that bottom rung.

They used all their cash or borrowed enormous amounts just to move into their at-the-time dream home. Then they had to face that issue of keeping it.

What happens when you have no money left for maintenance or repairs? Or your mortgage goes up because your lender has to escrow more to cover your increased property tax bill? And did you forget to factor in that a bigger house generally means bigger utility bills?

We watched some neighbors who scraped to get into their homes be forced out of them because they just couldn't afford to live in them. This was addressed in the Times' story: Owners were able to work around the affordability issue to get a house, but they had problems keeping it.

These articles sure punch some holes in some longstanding beliefs. Isn't owning a home supposed to be the culmination of the American dream, not to mention one of the best financial (and tax) moves a person can make? How did the economy and the housing sector in particular get so out of whack in just a quarter of a century?

I'm not an economist or mortgage expert and I don't play one here on my blog, so I have no magic answers to these distressing questions.

But I do know that while trickle-down economics doesn't work, the reverse is true: What's bad for the least among us is definitely not good for any of us.

TODAY'S TAX TIP: As I mentioned earlier, there are some tax advantages for homeowners. Those sometimes sky-high property taxes (like we pay here in Texas -- Austin, at least! -- to compensate for the fact we have no state income tax; the tax collector always finds a way to get to you!) can be deducted. So can mortgage loan interest. For more house-related tax breaks, check out this story I wrote for Bankrate.com.

And it looks like we Texans aren't alone in dealing with high property tax bills. Another New York Times' story today reports that:

"Soaring home prices, shifting population and sporadic budget crunches have combined to make property taxes one of the thorniest sources of voter anger and legislative angst in dozens of states. Call it the dark side of the real estate boom."

Dreamland: Andy, a reader from right here in Austin, writes to tell me that the 084 from my dream the other night is a New York issued Social Security number. Hmmm. Still trying to figure out what prompted my brain to want to take a night-time trip to the Empire State.

Parting shot: Taser International has announced that it will produce a Taser shotgun for long-range electrifying. Various reports on the new weapon can be found at CNet News, Chicago Tribune and  this Wisconsin TV station Web site.

Carnival update: Check out the 11th Carnival of Investing, hosted by Retire at 30.net. It went up Feb. 27 and this post is included, along with many other valuable items from other financial blogs.

Taking another spin on the Carnival carousel, this entry also is part of the 12th Festival of Frugality, hosted by Mighty Bargain Hunter. Check it out for a wealth of money-saving tips.

And chronologically last, but not least, the Carnival of the Vanities #180 went live on March 1, with this post as part of it. The Cigar Intelligence Agency, this week's host, does a really nice job of placing the posts in such wide-ranging categories as culture, ethics, economy, religion, politics, satire (aren't those last two the same thing?) and blogging itself. Take some time to drop by and read the myriad posts, chosen by the authors as their best recent works. You won't regret it.