Dammed if you do 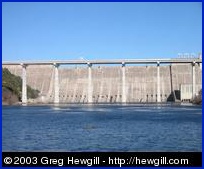 We live just a few miles from Mansfield Dam, which parcels off the Colorado River to create Lake Travis to the dam's north and Lake Austin to its south. You can take a virtual tour of the surrounding recreational area here.

This massive structure and others like it really are engineering marvels. It amazes me that people not only design such edifices, but actually build them.

My admiration, however, is tempered by the tree-hugger part of me that is deeply saddened any time humans decide to disrupt a natural process. That voice screams loudly in my head during the continual, though generally subdued, internal philosophical debate that it has with the material me, the one who likes my house in the neighborhood that likely wouldn't exist without the dam to control and manage water resources.

Here in the Austin/Hill Country area, H2O control falls to the Lower Colorado River Authority, officially described as "a Texas conservation and reclamation district operating with no taxing authority." Translated from bureaucrat-speak, that means LCRA has to find other ways to raise its operating funds, specifically by selling electricity and electric transmission and water services.

Because of the conservation component of its mandate, LCRA has to juggle natural resource management and environmental concerns with utility production capabilities. I wonder how many LCRA workers have the same internal arguments that I do?

It's a big job. Not only are LCRA's goals far-reaching, the resource it manages is huge. In a typical year, almost 600 billion gallons flow along the Colorado's 900-mile Texas course, starting near the Panhandle, then wandering through the central part of the state before ending up at the Gulf of Mexico.

This U.S. Geological Survey site has data on the Colorado's basin, along with those of other Lone Star rivers and some cool links. I didn't realize until today that my dry-as-a-bone West Texas hometown is technically in a river basin.

2006, however, hasn't been a typical year. Since we arrived here last May, it's been abnormally dry, coupled with stretches of record-breaking heat. That's caused some real problems.

On a personal level, our yard has major moisture-related issues. I want to dig out every inch of lawn and put in Xeriscape plants. My husband, even though mowing duties fall to him, is resistant to my sweeping botanical-change suggestions. The battle royale will be engaged in a couple of months where we start talking to landscape companies. We'll see whether the bulk of existing flora (and our marriage) will survive.

On a larger scale, area waterways also are suffering.

Lake Travis is already 17 feet below its full capacity elevation and could drop another 21 feet if the dry weather pattern continues. Unfortunately, that's very likely. The area of the lake designated as "Sometimes Islands," an acknowledgment of the land masses that pop up when the lake level drops, might this year become "Permanent Islands." I can see the developers' ads now: Prime new waterfront property! Great recreational opportunities!

It is finally raining a bit today. Well, here in our suburb, it's more like drizzle. Unfortunately, it looks like the major precip is north of us and moving northeast, away from Austin and the Colorado basin. I guess we'll leave the sprinkler system on for another week.

It's just enough rain to make the day icky, a bit too damp and cool (our heater has kicked in for the first time in daylight hours in ages) for any kind of outdoor activity. So I guess I'll be forced to stay inside today.

Maybe I'll work on getting our personal tax information in some kind of order. Year-end statements are starting to arrive and I've just been tossing them in a box in my office closet. An initial sort of the docs would be good. TODAY’S TAX TIP has details on what kind of filing-related statements to expect.

Or maybe I'll just light the fireplace, curl up on the couch and watch the NFL playoffs. Since the stupid, stupid Cowboys screwed up, I don't really care who wins. But being a Texan, I have an innate attraction to that goofily shaped ball and the guys that chase after it.

Dammed fine film: One of my favorite Burt Reynolds flicks is "Deliverance."  If that damned dam hadn't been planned, those guys wouldn't have had such an unfortunate river experience.

One of the canoes used in the movie is in Burt's museum in Jupiter, Fla., his hometown.

When we lived there (actually we lived in two communities adjacent to Jupiter, the village of Tequesta to the north before we moved to Palm Beach Gardens to the south) we visited the museum a couple of times.

If you're ever in the area and it's experiencing icky weather like we have today, it's a good place to while away some indoor hours.